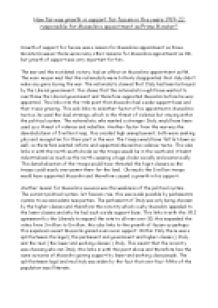 How far was growth in support for fascism in the years 1919-22 responsible for Mussolinis appointment as Prime Minster?

The split between legal and real italy was widen by the fact that over four fifths of the population was illiterate. Thirdly the long term problems of Italy help Mussolini to his success, the large North-South divide was the biggest long term problem. This happened because the North had industrialised quicker than the south, the North was already economically better off and the industrialisation increased the gap between the North and south. This North-South divide links to the demobalisation of the five million troops, this is because in the North they could not gain jobs as the north was industrialised and therefore needed skilled workers not troops, and in the South the poorer classes were exploited by the small amounts of land owners. Another long term was that the Political elite did little to resolve social and economic problems, this point links with the weakness of the political system, that the social and political elite ran the country and cared more about themselves than the people. This was also shown by the huge amounts of bribery that occurred within the parliament and government between politicians. ...read more.

The rising support for Mussolini was a major factor in his appointment as Prime Minister. In 1912 the Liberals agreed to expand the vote to all men over 30 this meant that the masses could now vote. This could have meant that Mussolini gained more supporters from the lower classes. This expanded the electorat from 3 to 5 million so Mussolini could have gained a lot of support. The main bulk of his supporters were ex-soldiers and revolutionaires who wanted recognition for their part in the war. Mussolini also had the Ras?, who were extreme facist thugs who wanted the use of violence or a revolution to gain control. Overall the growth in support was a key factor for Mussolini as it meant that he could use his dual stratgy to gain power. It also meant that he appealed to all the classes not just the lower class. He also appealed to different political groups, like the nationalists and facists, so he gained supportfrom peole in all the political parties. This meant that he ahd a foothold everywhere to be able to gain dictatorship at a later date. ...read more.