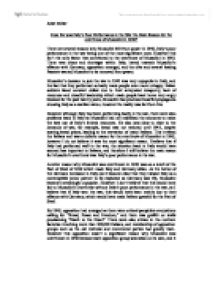 How Far was Italy's Poor Performance in the War the Main Reason for the overthrow of Mussolini in 1943? There are several reasons why Mussolini fell from power in 1943, Italy's poor performance in the war being one of the most significant ones. However this isn't the only factor that contributed to the overthrow of Mussolini in 1943. There was chaos and shortages within Italy, hatred towards Mussolini's alliance with Germany, opposition emerged, and the elite and several leading Fascists wanted Mussolini to be removed from power. Mussolini's decision to join the war in 1941 was very unpopular in Italy, and the fact that they performed so badly made people even more unhappy. Italian soldiers faced constant defeat due to their antiquated weaponry, lack of resources and dreadful leadership which made people back home very angry because for the past twenty years, Mussolini had produced boastful propaganda showing Italy as a warlike nation, however the reality was far from this. ...read more.

Another reason why Mussolini was overthrown in 1943 was as a result of the Pact of Steel of 1939 which made Italy and Germany allies. As the hatred of the Germans increased in Italy (as it became clear that they viewed Italy as a contemptible junior partner to be exploited as Germany saw fit), Mussolini became increasingly unpopular. However I don't believe that this would have led to Mussolini's overthrow without Italy's poor performance in the war, as I believe that if Italy won the war, this would have been mainly due to their alliance with Germany, which would have made Italians grateful for the Pact of Steel. By 1943, opposition had emerged as there were critical pamphlets everywhere calling for "Bread, Peace and Freedom," and there was graffiti on walls proclaiming "Death to the Duce!" ...read more.

To conclude, although there are several reasons why Mussolini was overthrown in 1943, I believe the main reason was Italy's poor performance in the war. Italy's defeat showed the Italians that for the past twenty years, Mussolini's propaganda boasting of a warlike nation were fiction, and this made them very angry. Furthermore, the poor performance in the war led to many shortages back home in Italy, and Mussolini was no longer able to lure Italians into a false sense of security. Italy's poor performance in the war also increased hatred towards the Germans, and angered Italians over the Pact of Steel of 1939. Lastly, the war led to the rise of opposition groups, and led to hostility from the elite and leading Fascists who had previously supported Mussolini. ?? ?? ?? ?? Juliet Miller ...read more.