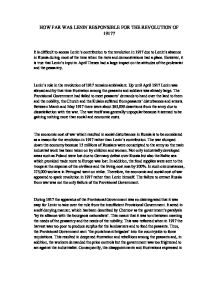 How far was Lenin responsible for the revolution in 1917?

HOW FAR WAS LENIN RESPONSIBLE FOR THE REVOLUTION OF 1917? It is difficult to access Lenin's contribution to the revolution in 1917 due to Lenin's absence in Russia during most of the time when the riots and demonstrations had a place. However, it is true that Lenin's input in April Theses had a large impact on the attitudes of the proletariat and the peasantry. Lenin's role in the revolution of 1917 remains ambivalent. Up until April 1917 Lenin was abroad and by that time frustration among the peasants and soldiers was already large. The Provisional Government had failed to meet peasants' demands to hand over the land to them and the nobility, the Church and the Kulaks suffered from peasants' disturbances and arrests. ...read more.

In addition, the food supplies were sent to the troops at the expense of the civilians and the living cost rose by 300%. In such circumstances, 175,000 workers in Petrograd went on strike. Therefore, the economic and social cost of war appeared to spark revolution in 1917 rather than Lenin himself. The failure to extract Russia from war was not the only failure of the Provisional Government. During 1917 the apparatus of the Provisional Government was so disintegrated that it was easy for Lenin to take over the rule from the insufficient Provisional Government. It acted in a self-denying manner, which has been described by Chernov as the government's paralysis 'by its alliance with the bourgeois nationalists'. ...read more.

Bolshevik support by December increased by 164% and its membership rose to 200,000 by October. Lenin himself claimed that 'history will not forgive us if we do not assume power'. On the other hand, some historians argue that Russia was heading for a socialists takeover anyway and Lenin only ensured that this takeover will be entitled to Bolsheviks. As before April 1917 Lenin was abroad, it is clear that he simply reacted to the simultaneous events. In this way, the revolution of 1917 was more an effect of the Provisional Government weaknesses than Lenin's actions. To conclude, Lenin was responsible for the revolution in 1917 only to the limited extent. The revolution therefore was more a direct consequence of the Provisional Government's instability and its failure to extract Russia from the war. ...read more.