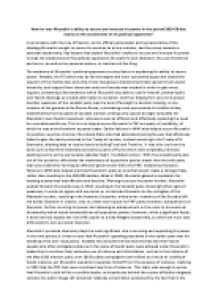 How far was Mussolinis ability to secure and increase his power in the period 1919-28 due mainly to the weaknesses of his political opponents?

﻿How far was Mussolini?s ability to secure and increase his power in the period 1919-28 due mainly to the weaknesses of his political opponents? In accordance with the rise of fascism, as the official party leader and representative of the ideology Mussolini sought to secure his position as prime minister, and the move towards a personal dictatorship. Key factors that explain Mussolini?s ability to secure and increase his power include the weaknesses of his political opponents, Mussolini?s own character, the use of violence and terror, as well as the personal actions, or inactions of the King. The weakness of Mussolini?s political opponents is a key factor in explaining his ability to secure power. Notably, the PSI which was by far the largest and most substantial opponent lacked the support of the middle class and elite; these two groups characterised Italy?s government power hierarchy, and support from these two sectors of society was needed in order to gain mass support, presenting a key weakness which Mussolini was able to use for himself, promoting his own fascist ideology as a viable alternative to socialism, and thus helping him secure his power. Another weakness of the socialist party was the lack of foresight in decision making, in one instance of the general strike Bienno Rosso, culminating a two year period of socialist strikes; inadvertently the thousands of socialist workers striking only caused stronger sympathy for Mussolini?s own fascist movement, who were seen as efficient and effectively replacing the need for a socialist workforce. ...read more.

Empire, to the extent that his public statement in 1922 that the Fascist party would seize power was met with considerable fear, and the King appointed Mussolini as Prime Minister, allowing him to finally secure power. This power was later maintained and expanded due to the Matteotti crisis; in response to the outrage ironically Mussolini was able to coax Parliament into offering him ?emergency powers? which would be used to initiate censorship of the press as well as shut down opposition parties, in accordance with his decree. Mussolini attempted to form a cult of personality, starting with education and indoctrination. Reforms were made in the education sector including compulsory school books that would feature Mussolini as the ultimate head of state, as well as numerous songs dedicated to Mussolini, helping to increase his power over the population. Further measures instigated by Mussolini include several other reforms such as the 1925 reform of public employees, whereby any individuals who were ?not compatible? with his fascist policies could be dismissed. Essentially, it was a propaganda initiative that was used by Mussolini to increase his own influence on the Italian population, and therefore increase his power as the reforms gradually became more totalitarian, changing from optional choices such as the ONB to compulsory memberships. Mussolini himself plays a bigger role in him securing and increasing his power, as in numerous instances it was the ability for him to navigate on the political scene; ironically it was often the cases where Mussolini was most at risk, such as the Matteotti crisis that allowed him to gain ...read more.

While the king often played the final role in securing or allowing Mussolini to increase his powers, the king does not play a significant part as it is mainly due to his inaction rather than any official actions, and therefore is the least significant factor out of the four. Overall it is clear that Mussolini?s own personal character was the most responsible for Mussolini?s ability to secure power as well as increase his power; it was often Mussolini?s ability to navigate the treacherous political landscape and quell outrage, as well as officially separating himself from any extreme violence that allowed him to be placed as a credible leader. His own policies for attempting to create a limited cult of personality as well as propaganda also contributed to his expansion in power, and is more significant than the other factors as his own actions are what directly implicates his role in government. While violence and terror also played a key part, it is not as significant when compared to the weakness of political opponents as ultimately it was this weakness that allowed Mussolini to attempt to seize power, and later would further Mussolini?s attempts to consolidate power in the Aventine Secession. The king therefore remains the least significant factor in securing and increasing his power, only playing a background role- he was often influenced by members of government and was relatively indecisive, ultimately allowing Mussolini to instigate his own policies no matter the outrage sparked, and therefore Mussolini himself is the greatest factor in this. ...read more.