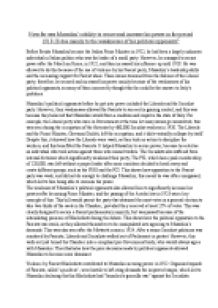 How far was Mussolinis ability to secure and increase his power in the period 1919-28 due mainly to the weaknesses of his political opponents?

﻿How far was Mussolini?s ability to secure and increase his power in the period 1919-28 due mainly to the weaknesses of his political opponents? Before Benito Mussolini became the Italian Prime Minister in 1922, he had been a largely unknown individual in Italian politics who was the leader of a small party. However, he managed to secure power after the March on Rome, in 1922, and then increased his influence up until 1928. He was allowed to do this because of the use of violence by his Fascist party, Mussolini?s leadership skills and the increasing support for Fascist ideas. These issues stemmed from the failures of the Liberal party; therefore, he secured and increased his power mainly because of the weaknesses of his political opponents, as many of them incorrectly thought that he could be the answer to Italy?s problems. Mussolini?s political opponents before he got into power included the Liberals and the Socialist party. However, their weaknesses allowed the Fascists to succeed in gaining control, and this was because they believed that Mussolini would form a coalition and improve the state of Italy. For example, the Liberal party who were in Government at the time let many issues go unresolved; this was seen during the occupation of the factories by 400,000 Socialist workers in 1920. ...read more.

OVRA carried out 20,000 raids across Italy each week, and detained some 6,000 political opponents. They often did this in a violent manner, which left people fearful; this helped Mussolini to increase his power, because if people were afraid of his secret police, it meant that they were less likely to cause any trouble. Although violence was a major reason that allowed Mussolini to secure and increase his power in Italy, it was not the most significant; this is because it is linked to the weak political opponents, as if they had stopped the Blackshirt violence before 1922, Mussolini would never have got into power. The leadership methods that were used by Mussolini were vital in helping him to secure power before the March on Rome in 1922. He was often described as an opportunist, and this was seen in the tactics that he used to gain mass support from many Italians. The Fascist party had no clear ideologies or ideas, and just reacted to events that occurred around them; they would then support the viewpoint that was the most popular with the people, and this method helped them to become gain support across the country. Mussolini also successfully used a dual policy in order to secure power. ...read more.

They also offered sport and summer camps, as well as pre-military training. These kind of groups put young people between the ages of six and eighteen in a right-wing environment; as a result, they were likely to believe in what they were being taught, and to support Mussolini in what he was trying to achieve in terms of making Italy a global power. Despite the increasing support for the Fascist party being a key reason that Mussolini was able to secure and increase his power in Italy, it was not the most important. This is because the weaknesses of Mussolini?s opposition created the situation which the Fascists then exploited to become popular. They used this to their advantage, so that by 1928, they were backed by the majority of the Italian population. In conclusion, Mussolini secured and increased his power mainly because of the weaknesses of his political opponents. This is because they were often naive enough to give him complete control in situations, such as in the Italian Chamber after the Matteotti crisis. Although there were other reasons that allowed Mussolini to secure and increase his power, none of them were as important as the political weaknesses. This is because violence, Mussolini?s leadership and the increasing support that Fascists received were all linked to the previous reasons, so mainly stemmed from the failures of the Liberals and Socialist before 1922. ` ...read more.