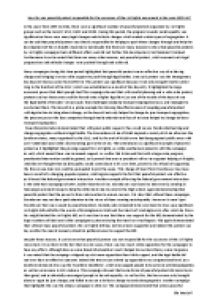 How far was peaceful protest responsible for the successes of the civil rights movement in the years 1955-64?

﻿How far was peaceful protest responsible for the successes of the civil rights movement in the years 1955-64? In the years from 1955 to 1964, there were a significant number of peaceful protests organised by civil rights groups such as the NAACP, SCLC, SNCC and CORE. During this period, the progress towards racial equality was significant as there were many legal changes and de facto changes which ended certain types of segregation. It can be said that peaceful protest was directly responsible for helping to push these changes through and help the development of the civil rights movement, but despite this there are many reasons to show that peaceful protests by civil rights campaigns had a different effect, and did not further this development, but hindered it instead. Furthermore it can be noted that there are many other reasons, not peaceful protest, which ensured such legal progressions and attitude changes were pushed through and achieved. Many campaigns during this time period highlighted that peaceful protest was an effective way of achieving change and bringing in extra white support to push through legal battles. One such protest was the Montgomery Bus Boycott that occurred from 1955-56. This protest was significant because it not only brought Martin Luther King to the forefront of the SCLC (which was established as a result of the Boycott), it highlighted the large economic power that black people had This campaign showed that with careful planning and a wide scale protest, protests such as these ones could be forced onto a higher legal level, ...read more.

This campaign showed that some forms of peaceful protest did more harm than good, and accidentally encouraged people to be anti-equality. As well as this, the Brown case only brought about a vague de jure change, and failed to secure a de facto change towards desegregation. Another campaign that highlights this was the Albany campaign in 1961-62. This campaign demonstrated that unless peaceful protests were on a mass scale and held in the right places, no change could be made. The Albany campaign was poorly planned, because they did not know how Pritchett would react, had they known this, they would have known that in order to gain support, media attention should be focused on violent measures being used against protestors. As well as this, the Albany campaign led to divisions within the civil rights groups, as many believed that peaceful protest was not the way to carry on. These campaigns demonstrated that peaceful protests did not always bring about positive changes. More evidence that supports this is that peaceful protesting sometimes led to the alienation of Presidents, and their support was key if changes were to be made. One example of this is the Mississippi Freedom Summer of 1964, which was another example of unsuccessful peaceful protest. This was because it led to a further increase in KKK violence and also signalled a breakdown between President Johnson and Civil Rights campaigners. As President Johnson proves to have domestic policies catered towards furthering the status of Black Americans, this can be seen as a big mistake, because it may cause Johnson to rethink his policies or direct his attention elsewhere. ...read more.

This demonstrates that Presidents had a lot of power in ensuring the successes of the civil rights campaigns. To a large extent, peaceful protest was responsible for the successes of the civil rights movement in 1955 to 1964. This is mainly because the protests drew a large amount of attention towards campaigners, as Birmingham and March on Washington forced Kennedy to back the civil rights bill. Without these campaigns, it is unlikely that the civil rights movements would have achieved presidential backing as well as support from the northern whites. However peaceful protests were not always successful as they did not always increase support for the cause, but rather stirred up more opposition, as was the case of Brown versus Board of Education where KKK violence increased. As well as this peaceful protests had to be properly organised and be widespread for it to have any effect. Despite the fact that protests were successful in bringing about change, it is unlikely than any change would have occurred if it hadn?t been for the media attention on the campaigns, and the support from within the Federal Government. Despite this, if there hadn?t been any peaceful protest, the media would have no media attention, and without peaceful protest, Presidents would be unlikely to help change the position of black Americans. It is for these reasons that to a large extent, peaceful protest was responsible for successes of the civil rights movement from 1955 to 1964. Ella MacColl ...read more.