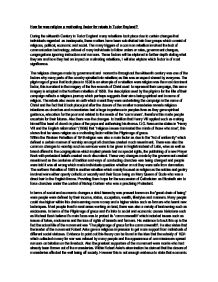 How far was religion a motivating factor for rebels in Tudor England?

How far was religion a motivating factor for rebels in Tudor England? During the sixteenth Century in Tudor England many rebellions took place due to certain changes that individuals regarded as inadequate, these matters have been sub-divided into four groups which consist of religious, political, economic and social. The many triggers of a common rebellion involved the lack of communication technology, refusal of many individuals to follow orders or rules, government changes, congregations ignoring instruction and rumours. These factors will be explored in further depth stating what they are and how they had an impact on motivating rebellions, I will also explore which factor is of most significance. The religious changes made by government and monarchs throughout the sixteenth century was one of the factors why many parts of the country spiralled into rebellion; as this was an aspect shared by everyone. The pilgrimage of grace that took place in 1536 is an example of a rebellion were religion was the most dominant factor, this is evident in the imagery of the five wounds of Christ used to represent their campaign, this same imagery is adopted in the Northern rebellion of 1569. ...read more.

The northern Rebellion of 1569 is another rebellion which mainly focused on religion as the nobles and gentry involved were either openly catholic or secretly and their focus being on Mary Queen of Scots who was a direct heir to the English throne. Providing them hope for the succession of Catholicism as Elizabeth aim to force churches under the control of Bishop Durham who was a practising Protestant. In terms of social and economic changes a strict hierarchy was present known as the "great chain of being" were people were defined by their income, status, occupation, wealth, lifestyles and manners. Many people could rise higher within this chain earning more money and a higher status such as farmers who learnt new techniques. Most people lived In rural areas working on land, there was also a variety of landowning such as enclosures. In terms of the Pilgrimage of grace and it's links to social and economic causes historians such as Michael Bush believe it's main focus was to protect its "commonwealth" which included issues such as issues of taxes, enclosures and the loss of rights of tenants and farmers. ...read more.

Wyatt's rebellion had minor aspects of these factor such as some of the supporters Wyatt gathered were due to the fact that Kent depended on the woollen industry and the decline of it in the 1550s due to new types of fabric coming in such as silk affected trade and this resentment gave him further supporters. On the whole In terms of whether religion was a motivating factor for the rebel I believe it was as there is much evidence to support it and the fact that although some of the leaders had other aims in mind the majority of the "commoners" had the religious changes taking place as the number one priority and people like Robert Aske noticed this gaining support with individuals different beliefs. Also religion was something everyone believed in at the time. However Ket's rebellion does not have much religious issues in mind as it focuses on the social and economic changes that have taken place, and rebellions such as Wyatt's rebellion was mainly political and to do with the dynastic order but contained aspects of religion within there. Therefore In my opinion religion was mainly the motivating factor for rebels in some of the rebellions such as the Pilgrimage of grace, the western rebellion and the northern rebellion. ...read more.