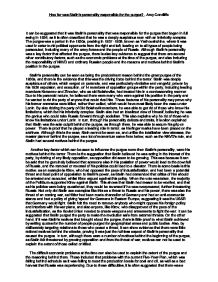 How far was Stalin's personality responsible for the purges?

How far was Stalin's personality responsible for the purges? - Amy Condliffe ? It can be suggested that it was Stalin's personality that was responsible for the purges that began in full swing in 1936, as it is often described that he was a deeply suspicious man with an inferiority complex. The purges was a period in the 1930s, peaking in 1937 -1938, known as Yezhovshchina, where it was used in order to rid political opponents from the right and left, leading on to all types of people being persecuted, including many of the army forces and the people of Russia. Although Stalin's personality was a key factor that affected the purges, there is also key evidence to suggest that there are several other contributory factors, such as the economic problems at the time of the purges, and also including the responsibility of NKVD and ordinary Russian people and the reasons and motives behind Stalin's position in the purges. Stalin's personality can be seen as being the predominant reason behind the great purges of the 1930s, and there is the evidence that this was the driving force behind the terror. Stalin was deeply suspicious of others, which verged on paranoia, and was particularly vindictive and vengeful, proven by his 1936 expulsion, and execution, of 14 members of opposition groups within the party, including leading members Kamenev and Zinoviev, who as old Bolsheviks, had treated him in a condescending manner. ...read more.

It can be suggested that Stalin purged the party to make the revolution safe from external threats. On the other hand, if it was Stalin's motives that brought about the purges, there is little proof to what Stalin achieved by setting quotas for the number of people purged for geographical areas and public bodies. Also, by deliberately targeting relations to those who posed a threat, it can show evidence that there were little rational motives behind the attacks, proving it was just the ruthless aspect of Stalin's personality that caused the purges. In turn, although there were a number of motives behind the beginning of the purges, as Stalin felt threatened by growing opposition and from the threat of war, motives can not be used to explain the extent of those exiled or killed. The difficult economic problems at the time can also be used to explain the extent of the purges and the reasoning behind them. These included that problems with the current Five-Year-Plan, which was falling behind schedule as it was failing to meet the production levels for coal and oil, as well as a bad harvest that Russia was experiencing. Due to these difficulties, it is often suggested that there ?was a need to find scapegoats for the economic failures, amongst managers and workers. ...read more.

insecure, vengeful leader that felt the need to secure his grip on power by ridding of those who might oppose him, such as Kirov. Although he achieved this, it is not fair to say that Stalin's personality was the sole reason behind the extent of the purges, as there were many other contributing factors. Stalin had several motives behind his attack, as he needed to secure Russia from war and it is often perceived that Stalin truly believed that he was the only one who could drive Russia forward through industrialization, highlighted by his idealized view of himself and the economic problems they were facing at the time. Also, there is the suggestion that the NKVD felt the need to prove their worth, and momentum often began to build from below, with ordinary Russians feeling the need to denounce work colleagues, often to protect themselves. On the other hand, although Stalin's personality was most likely not the sole reason for how far the purges extended to, it can be blamed for the increasing numbers of those purges and executed, as although Lenin purged the party through the early 1920s, very few were executed under him, and t can only be described as Stalin's ruthless and vengeful personality that started humiliating attacks such as forced confession and execution, therefore setting the purges in motion. ...read more.