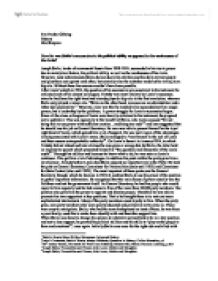 How far was Stalin's success due to his political ability as opposed to the weaknesses of his rivals?

Eva Frauke G�hring History Mrs Simpson How far was Stalin's success due to his political ability as opposed to the weaknesses of his rivals? Joseph Stalin, leader of communist Russia from 1928-1953, succeeded in his rise to power due to mainly two factors, his political ability, as well as the weaknesses of his rivals. However, most achievements Stalin did are due to his abilities and his skills to treat people and play them out against each other, but certainly also the mistakes made by his rivals play a big role. Without those his success wouldn't have been possible. After Lenin's death in 1924, the question of his succession was unsolved. In his testament he criticised each of his closest colleagues. Trotsky was most likely to be Lenin's successor, since he had been his right-hand and already played a big role in the first revolution, whereas Stalin only played a minor role. "Stalin on the other hand, was seen as an administrator and a rather dull personality." 1However, clear was that he wanted to be succeeded not by a single person, but a leadership by the politburo. A power struggle for Lenin's succession began. ...read more.

Many of the party members owed loyalty to him. When the party grew, new party members who were poorly educated and politically na�ve came in. These were easy to manipulate. Stalin, who had the same background as most of them, he was from a poor family, used this to make them identify with and therefore support him. When Stalin was about to change his opinion to whatever seemed best to be in a key position and not to lose support, he proved his political abilities and his skills to "play on the people's fears and emotions"5, once again. Initially Stalin was more for the right side and allied with Bukharin, Tomsky and Rykov. They were for NEP, or private ownership and for "socialism in one country" rather than the left, who were for a widespread revolution and against NEP. Trotsky then openly attacked the economic policies. This criticism was unpopular in the Party and the chance was there to accuse Trotsky of factionalism, which banned the formation of any factions in the party and ensured party solidarity. Stalin didn't hesitate and took the opportunity. After also having moved against Zinoviev and Kamenev, they and Trotsky formed the 'United Opposition' that again Stalin was able to defeat through his previous actions and abilities, their attempt to fight back was too late. ...read more.

He was almost seen as a danger to the revolution and "someone who might betray for his own ends."8 The next great mistake he made was not to take any opportunities to stop or weaken Stalin. He did not debate Stalin and didn't even try to compete. He never made an attempt to respond to criticism. Trotsky often did not attend to important party meetings, due to illnesses. He did little to built up support and therefore had no support were it counted. Another important point in Stalin's success that was due to his rival's weaknesses was that Lenin's Testament was not published. This could have cost Stalin his job. But Zinoviev etc. were more concerned about Trotsky and since the testament damaged them all they agreed not to publish it. Trotsky again did not speak. And Lenin's fears about Stalin weren't paid attention to. In conclusion, Stalin's abilities as well as the weaknesses of his rivals were important in the power struggle and Stalin's success. The Politburo underestimated him and allowed themselves to appear as the opposition. Therefore they were in danger of factionalism and could easily be played and voted out. Stalin managed to appear as a moderator between the Left and the Right and knew how to appeal to people and could therefore play them out against each other. ...read more.