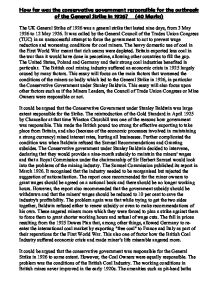 How far was the conservative government responsible for the outbreak of the General Strike in 1926? (40 Marks)

How far was the conservative government responsible for the outbreak of the General Strike in 1926? (40 Marks) The UK General Strike of 1926 was a general strike that lasted nine days, from 3 May 1926 to 12 May 1926. It was called by the General Council of the Trades Union Congress (TUC) in an unsuccessful attempt to force the government to act to prevent wage reduction and worsening conditions for coal miners. The heavy domestic use of coal in the First World War meant that rich seams were depleted. Britain exported less coal in the war than it would have done in peacetime, allowing other countries to fill the gap. The United States, Poland and Germany and their strong coal industries benefited in particular. The British coal mining industry suffered an economic crisis in 1925 largely caused by many factors. This essay will focus on the main factors that worsened the conditions of the miners so badly which led to the General Strike in 1926, in particular the Conservative Government under Stanley Baldwin. This essay will also focus upon other factors such as if the Miners Leaders, the Council of Trade Union Congress or Mine Owners were responsible or not. It could be argued that the Conservative Government under Stanley Baldwin was large extent responsible for the Strike. The reintroduction of the Gold Standard in April 1925 by Chancellor at that time Winston Churchill was one of the reasons how government was responsible. ...read more.

From 1922 to 1924, over 3,603 miners died and 597,193 were injured. These conditions were appalling. The fall in prices resulting from the 1925 Dawes Plan that, among other things, allowed Germany to re-enter the international coal market by exporting "free coal" to France and Italy as part of their reparations for the First World War, whereupon the demand for the British coal plummeted. The heavy domestic use of coal in the First World War meant that rich seams were depleted. Britain exported less coal in the war than it would have done in peacetime, allowing other countries to fill the gap. The United States, Poland and Germany and their strong coal industries benefited in particular. In 1925 the industry was running at a loss, and at the end of June 1925 the owners insisted on wage cuts and longer hours. Mine owners wanted to normalise profits even during times of economic instability - which often took the form of wage reductions for miners in their employ. Coupled with the prospect of longer working hours, the industry was thrown into disarray. This even angered the miners more. The Samuel report of 1926 gave some hope to the miners for better working conditions however; even this was crushed when the report also recommended that the government subsidy should be withdrawn and that the miners' wages should be reduced to 10 per cent to save the industry's profitability. ...read more.

This would be a trigger to the strike as the miners would argue that if the leaders are so unaware and are not going to do anything about conditions and amenities then they would need to so something to raise awareness and achieve what they wanted through projecting a voice; strikes. After looking at all the factors, we could say that each factor played an important part in the outbreak of the General Strike 1926; however I think the most important factor that was responsible to a large extent for the General Strike in 1926. People may argue that mine owners were largely responsible because they introduced wage cuts and long working hours however, government is more responsible here because the conservative government was in power and they could possibly stop the mine owners. It could be argued that mine owners introduced all these to save their coal industry and possibly save the miner from being unemployed if the coal industries do not work in competition of the other countries so In conclusion I think conservative government were more responsible than any other factors because, at the end of the day at that time they were in power and they could possibly look after the miners problems as well as the problems of coal-industry. They even refused to accept Samuel commission report that made the miners upset. ...read more.