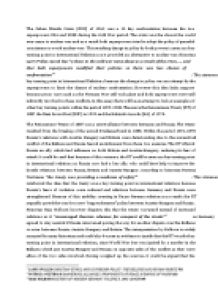 How far was the Cuban missile crisis the most significant event in the years 1890-1980? If not what was?

﻿The Cuban Missile Crisis (CMC) of 1962 was a 13 day confrontation between the two superpowers USA and USSR during the Cold War period. The crisis was the closest the world ever came to nuclear war and as a result both superpowers tried to adopt the policy of peaceful coexistence to avoid nuclear war. This resulting change in policy by both powers is seen as a key turning point in International Relations as it provided an alternative to nuclear war. Historian Larry Pullen stated that ?a thaw in the cold war came about as a result of the crisis?.. and that both superpowers modified their policies so there was less chance of confrontation?[1]. This statement by Pullen reinforces the idea that the Cuban Missile Crisis was a key turning point in International Relations because the change in policy was an attempt by the superpowers to limit the chance of nuclear confrontation. However this idea lacks support because proxy wars such as the Vietnam War still took place and both superpowers were still indirectly involved in these conflicts. In this essay there will be an attempt to look at examples of other key turning points within the period 1879-1980. ...read more.

This arguably made the refute of the RT the key turning point in International relations within period (1879-1880) as Russia inherited hostile relations with Germany as a result of the refusal RT resulting in a Franco-Russo alliance. Overall it could be said that the end of the Treaty was the key turning point in International Relations because it indirectly led to World War One. As well as resulting in a Peaceful coexistence with Russia historian Dominic Johnson summarised that the Cuban Missile Crisis, affected relations between the USSR and China as Russia appeared to look weak in front of the world[5] and according to Johnson this seemed to have made Russia fall short in favour of China as they appeared as the inferior superpower compared to the USA. This was a key turning point in international relations as Sino Soviet relations completely deteriorated and this deterioration in Sino-Soviet relations arguably led to the ?Rapprochement? policy between China and the USA. However the significance of this as the key turning point in the deterioration of Sino-Soviet relations can be questioned as the relationship between China and Russia was already strained. ...read more.

period. A turning point within the period (1879-1980) that did lead to International Co-operation was the Helsinki Accords in 1975. The Helsinki Accords Overall it could be said that the Cuban missile crisis was not a key turning point in international relations as it resulted from hostile tension in the cold war and an event like the cold war was likely to happen. Also it did not lead to any direct conflicts between the two superpowers ________________ [1] LARRY PULLEN CHRISTIAN ETHICS AND US FOREIGN POLICY :THE HELSINKI AND HUMAN RIGHTS P8 [2] PATRICIA WEITSMAN DANGEROUS ALLIANCES :PROPONENTS OF PEACE ,WEAPONS OF WAR.P103 [3] HAJO HOLBORN HISTORY OF MODERN GERMANY VOLUME 3 1845-1890.P249 [4] DR GARY SHEFFIELD BBC HISTORY WORLD WAR ONE [5] DOMINIC D. P JOHNSON, DOMINIC TIERNEY, FAILING TO WIN: PERCEPTIONS OF VICTORY AND DEFEAT IN INTERNATIONAL POLITICS P114 [6] YU MAOCHUN THE DRAGONS WAR: ALLIED OPERATIONS AND THE FATE OF CHINA , CHAPTER 2 P18 [7] YU MAOCHUN THE DRAGONS WAR: ALLIED OPERATIONS AND THE FATE OF CHINA [8] MICHAEL DOCKRILL 1988 THE COLD WAR 1945-1963 [9] MARTIN MCCAULEY THE ORIGINS OF THE COLD WAR 1941-1949 P6 [10] ANDREW CARL SORBEL STATE INSTITUTIONS, PRIVATE INCENTIVES, GLOBAL CAPITAL P79 ...read more.