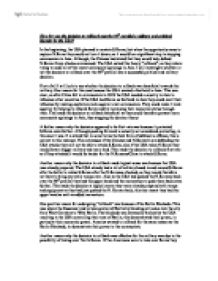 How far was the decision to rollback past the 38th parallel a military and political blunder by the USA?

How far was the decision to rollback past the 38th parallel a military and political blunder by the USA? In the beginning, the USA planned to contain S.Korea, but when the opportunity arose to capture N.Korea they could not turn it down; as it would be a significant step to stopping communism in Asia. Although, the Chinese had stated that they would help defend N.Korea if any attacks commenced. The USA called this theory "rollback", as they where trying to undo all of the recent communist uprisings in Asia. I will investigate whether or not the decision to rollback over the 38th parallel was a successful political and military decision. First of all I will look to see whether the decision to rollback was beneficial towards the military. One reason for this was because the USA wanted a foothold in Asia. This was clear, as after China fell to communism in 1949 the USA needed a country in Asia to influence other countries. If the USA had Korea as foothold in Asia they could exert their influence by making capitalism look superior over communism. They could make it look superior by helping to rebuild Korea and by increasing their economic status through Asia. This made the decision to rollback beneficial as they could therefore prevent more communist uprisings in Asia, thus stopping the domino theory A further reason why the decision appeared to be first-rate was because it protected S.Korea even further. Although pushing forward is actually not considered protecting, in this case it was. ...read more.

As a result this made the decision look like a disaster, this is because for their "rollback theory" to work they needed to maintain momentum, certainly not be pushed back. Another reason why it was a poor mistake by the US military to allow rollback was that the Chinese heavily outnumbered them. Not only did the Chinese outnumber the USA but they were also a large well-trained army that used good tactics. These are the two biggest factors you could have in the war, but yet the USA was still confident that they could win against China. As a result I see this a poor decision by the USA because they never had a chance to win against the Chinese considering how many of them there were and how well-trained they were, but they chose to ignore the threat of China. Another reason why the decision was dreadful was due to the fact that the USA were dragging themselves into a bigger war. Whereas before they were just defending their allies in a civil war, they are now the attackers. The USA's plan was to take over N.Korea, a country both heavily affiliated with Russia. This was a very stupid decision as it was bringing a super power into this, otherwise, small war. Also before the USA chose to attack N.Korea they were told by China if they attack their allies they would help to defend them. This escalated the war even further due to China's large population, which greatly outnumbered the UN. ...read more.