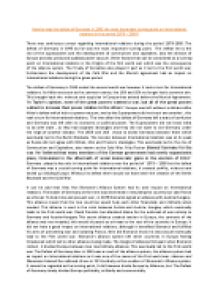 How far was the defeat of Germany in 1945 the most important turning point on International relations in the period 1879 1980?

Bismarck?s alliance system left other countries in Europe feeling threatened which led to other alliances being made. The tangle of alliances fell apart when Bismarck retired , it divided Europe between two rival military alliances. This eventually led to the First world war. The Defeat of Germany later in 1945 was a result of the alliance system, the alliance system had an impact on International relations as it was one of the causes of the First world war. Herman and Stevenson blamed the outbreak of war in 1914 entirely on the creation of Bismarck?s Alliance system. It cannot be regarded as the turning point, It did however divide Europe by Alliances, but The Defeat of Germany clearly divided Europe politically, militarily and economically. The aftermath of the First World War had its own turn for international relations. The Treaty of Versailles was a punishment for Germany after the first world war. The Treaty of Versailles was the peace settlement signed after World War One had ended in 1918 and in the shadow of the Russian Revolution and other events in Russia. The treaty required Germany to pay reparations to the allies, however it was difficult for Germany to do so, as most of their areas which produced precious raw materials were divided by Europe. Also with the need to recover their own economy it was difficult for the Germans to actually pay these reparations. ...read more.