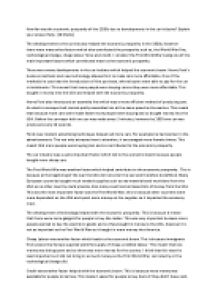 How far was the economic prosperity of the 1920s due to developments in the car industry?

For example he had women in the advertisements. This not only attracted men?s attention, it encouraged more female drivers. This meant that more people were buying cars and so contributed to the economic prosperity. The car industry was a quite important factor which led to the economic boom because people bought more cheap cars. The First World War was another factor which helped contribute to the economic prosperity. This is because at the beginning of the war the USA did not enter the war and therefore benefitted. Many European countries bought much needed supplies such as raw materials and munitions from the USA as no other country could provide. ...read more.

I think that this was the least important as it did not bring in as much money as the First World War, car industry or the technological change did. Credit was another factor helped with the economic boom. This is because more money was available for people to borrow. This made it easier for people to buy items if they didn?t have cash, because they could always pay later. I think that credit was fairly important, because more people buying goods bought more money into America. In conclusion overall I believe the car industry was not the most important factor which contributed most to the economic boom I believe First World War was as it was the factor which bought in the most amount of money compared to the other factors, ...read more.