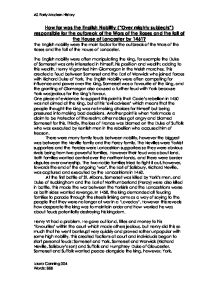 How far was the English Nobility (Over mighty subjects) responsible for the outbreak of the Wars of the Roses and the fall of the House of Lancaster by 1461?

were also killed in battle. This made the war between the Yorkists and the Lancastrians worse as both sides wanted revenge. In 1458, the king demanded all feuding families to parade through the streets linking arms as a way of saying to the people that they were no longer at war in a 'Loveday'. However this reveals how desperate the king was to maintain order and how worried he was about feuds potentially destroying his kingdom. Henry VI had a problem. He gave out land, titles and money to his 'favourites' within the court which made others jealous, but Henry did this so much that he went bankrupt very quickly and proved rather unpopular with some high nobility. This created factions at court and individuals began to start personal feuds: Somerset and York, Somerset and Warwick (Richard Neville, Salisbury's son) and Suffolk and Humphrey Duke of Gloucester. Somerset and Suffolk wanted peace alongside the king, however, York, Warwick and Gloucester wanted to continue fighting against France. ...read more.

The nobles suspected they were attempting to place their 'illegitimate' son on the throne of England, making Somerset the most powerful man in England. After much tension building in both the Yorkists and Lancastrians due to blood being spilt and victories on either side, they fought the first battle at St. Albans in March 1455. The king did not fight for his side; he was supposedly sitting under a tree laughing away, watching the battle unfold. In conclusion to all the evidence gathered, the English nobility were mainly responsible for the outbreak of the Wars of the Roses and the fall of the House of Lancaster because of their manipulation of the king, their personal feuds and the battles of revenge for blood lost. However, king Henry VI also played a part in this outbreak because of his 'addiction' for royal patronage, having favourites within the court, failing in the war against France (losing all the land gained previously) and his insanity which led to his Queen leading the country. ?? ?? ?? ?? AS Early Modern History Laura Canning 304 Words: 888 ...read more.