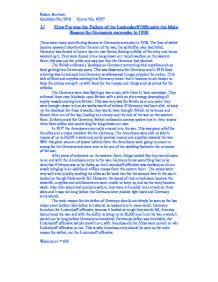 How Far was the Failure of the Ludendorff Offensive the Main Reason for Germanys surrender in 1918?

3/ How Far was the Failure of the Ludendorff Offensive the Main Reason for Germanys surrender in 1918? There were many contributing factors to Germanys surrender in 1918. The first of which became apparent shortly after the start of the war, the schlieffen plan had failed. Germany was forced to have a war on two fronts, forcing a divide of the army and hence weakening it. They were forced into a long drawn out trench warfare on the western front; this was not the quick and easy war that the Germans had planned. The British enforced a blockade on Germany preventing vital supplies such as food getting into Germanys ports. ...read more.

Unfortunately for Germany, Britain enforced a convoy system just in time to save them from defeat and continuing the long drawn out war. In 1917 the Americans eventually entered into the war. This was great relief for the allies and a major problem for the Germans. The Americans were able to ship in troops of up to 50,000 a week and could provide money and supplies towards the war. With this great amount of power behind them the Americans were going to prove to strong for the Germans and were sure to be one of the deciding factors in the outcome of the war. After years of stalemate on the western front, things looked like they would come to an end with the Americans entry to the war. ...read more.