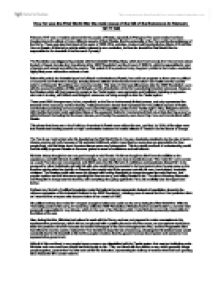 How far was the First World War the main cause of the fall of the Romanovs in February 1917? [30] February 1917 was a massive upheaval for the people of Russia, especially in Petrograd. For years tension had been brewing due to the effects of many different aspects of life in Russia, like the personality of the Tsar and the inconsistency of the Duma. There was also the impact of the years of 1906-1914, and also, maybe most importantly the effects of World War One on Russia. All this led to what is widely referred to as a revolution, but how far should the First World War be responsible for the downfall of the Romanov Dynasty? The Revolution was triggered by protests with the Industrial Working Class, which stemmed not only from the rumours about the lack of bread, but also from the effects of the 1905 'Revolution' and the impact of 1906-14, which is responsible for a lot of tension and resentment within the country. This period of time produced many long-term problems that made a revolution highly likely even without the outbreak of war. Before this period, the industrial spurt had offered modernisation to Russia, but could not progress as there was no political or economic commitment to change, showing that the attitude of the Government to reform was hostile and the counter reforms of Alexander II's policies were more favourable. This state of mind was still present after the 1905 'Revolution', even with the economic policies of Witte and Stolypin, and the introduction of the Duma producing important advances. ...read more.

As said before, this led the people, as well as some ministers, to believe that the government was incapable in running Russia, and left Nicholas with truly united opposition and a lot of disloyalty, unlike in 1905. On top of this, when the Duma was dissolved by Nicholas because of his stubbornness, the most popular opinion was that the government was totally incapable, and there were calls for fundamental changes in the structure of the government. This discontent with the government was also intensified by the constant steam of incapable ministers, courtesy of Rasputin and Alexandria. You can find many links between the personality of the Tsar and the problems with the Political System in the fall of the Romanovs in February 1917. Many of these problems were connected with the decisions that Nicholas had taken. For example, the Tsar's decision that Alexandria and Rasputin should rule the country, as Nicholas was weak and easily governed by others, especially his wife. This would both ruin his credibility and create more tension within Russia, because they seemed to be making the government even less capable of running the country. All of this discontent that I've mentioned, combined with the strain of the impact of 1906-14 leads me to think that a revolution would still have been likely even without the war. However, it appears that many of these problems with the government and the impact of the 1905 'Revolution' were severely highlighted, increased or produced because of the First World War, like Rasputin and Alexandria, who would never had been left in power if Russia had not gone to war. ...read more.

To some extent, the war brought about a burst of patriotic feeling within Russia, but as well as holding off the Revolution, it also intensified it. Saying this, however, you could say that there could be no outstanding cause, and even without the eruption of war, a revolution would still have been very likely. I have come to believe that a critical element in the abdication of the Tsar and the downfall of the Romanov family was, indeed, the effects and consequences of the First World War. By saying this, I do acknowledge that a revolution would still have been likely because of the constant unrest within the country; with the inconsistent political system, the feeble personality of the Tsar, the ineffectual reforms after the 1905 'Revolution', and also the history of humiliating military defeats. In my opinion, the First World War was the vital element in the fall of the Romanovs because it created the conditions in which to overthrow the Tsar. This is because of how he was personally blamed for the war, and how everything to do with the war went against him. For example, his arrogance in believing he could run the war, his stubbornness to accept political reforms during the conflict, and also the losses of millions of men, the lack of food and the massive inflation. This all enhanced the negative effects of the 1905 'Revolution'. As a consequence, this turned the people against the government, which was increasingly being seen as incapable, which was emphasized by the unpopularity of the Tsarina because of her German nationality. This then leads me to say that, yes, World War One should be held accountable, and was the fundamental element in the fall of the Romanovs in February 1917. ...read more.