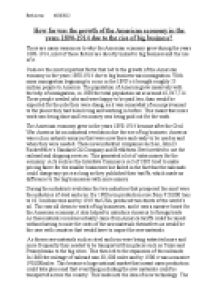 How far was the growth of the American economy in the years 1890-1914 due to the rise of big business?

﻿Beth Avon 6/10/2012 How far was the growth of the American economy in the years 1890-1914 due to the rise of big business? There are many reasons as to why the American economy grew during the years 1890-1914, most of these factors are directly linked to big business and the rise of it. I believe the most important factor that led to the growth of the American economy in the years 1890-1914 due to big business was immigration. With mass immigration beginning to occur in the 1890?s it brought roughly 25 million people to America. The population of America grew massively with the help of immigration, in 1890 the total population sat at around 62,947,714. These people needed jobs and were happy to be paid less, than would be expected for the jobs they were doing, as it was somewhat of an improvement to the places they had been living and working in before. ...read more.

By 1900 iron production rose from 920,000 tons to 10.3 million tons and by 1919 the USA produced two-thirds of the world?s oil. This was all down to work of big businesses, and it was a massive boost for the American economy, it also helped to introduce America to foreign trade. As these natural recourses actually came from America tariffs could be raised without having to raise the costs of the raw materials themselves as would be the case with countries that would have to import the raw materials. As theses raw materials such as steel and iron were being extracted more and more frequently they needed to be transported from places such as Texas and Pennsylvania to the big cities. This then led to the expansion of the railroads. In 1860 the mileage of railroad was 30, 000 miles and by 1900 it was a massive 190,000miles. ...read more.

I think another big factor is individuals and vertical integration. Powerful individuals such as Henry Ford had the ability to link their creation to their business in a way that meant they controlled not only the making of their invention but also all the processes of getting their product on the market. This meant that over time big businesses got even bigger and they pumped more money into the economy. Overall I believe that big business played a massive part in the growth of the American economy in the years 1890-1914, and I believe that immigration was the main factor that helped the big businesses to help the economy. Without the immigrants cheap labour would not have been possible and therefore the amount of work done in those years perhaps would not have been done so quickly and definitely not done as cheaply. ...read more.