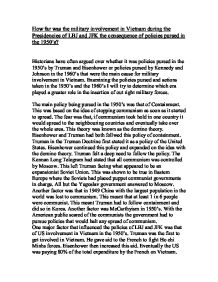 How far was the military involvement in Vietnam during the Presidencies of LBJ and JFK the consequence of policies pursed in the 1950's?

How far was the military involvement in Vietnam during the Presidencies of LBJ and JFK the consequence of policies pursed in the 1950's? Historians have often argued over whether it was policies pursed in the 1950's by Truman and Eisenhower or policies pursed by Kennedy and Johnson in the 1960's that were the main cause for military involvement in Vietnam. Examining the policies pursed and actions taken in the 1950's and the 1960's I will try to determine which era played a greater role in the insertion of out right military forces. The main policy being pursed in the 1950's was that of Containment. This was based on the idea of stopping communism as soon as it started to spread. The fear was that, if communism took hold in one country it would spread to the neighbouring countries and eventually take over the whole area. This theory was known as the domino theory. Eisenhower and Truman had both follwed this policy of containment. Truman in the Truman Doctrine first stated it as a policy of the United States. Eisenhower continued this policy and expanded on the idea with the domino theory. ...read more.

He was also a democrat and therefore could not be seen as being weak on the communists. If he was seen as weak the democrats would not only lose the Presidency in 4 years but probably the mid term elections for congress. He was also young and many saw him as inexperienced. Kennedy wanted to shake off this image. Therefore as soon as he took office it was vital that he appear strong against the communist 'threat' in Vietnam. With the Bay of Pigs fiasco he became even more resolute in this policy. Kennedy increased aid to the South Vietnamese and sent over more 'advisors'. Increasing the number of advisors to almost 16000. He escalated the war even further. However it was necessary, as Kennedy like his predecessor he was following the policy of containment. The policy was never reviewed under Kennedy and remained unchanged. Whilst he was following this policy, handed down from the 1950's, Kennedy had no choice but to increase his aid and support to Vietnam. To combat the ever-increasing threat posed by the VC. As with Eisenhower, Kennedy's further escalation of the conflict in Vietnam was just a natural progression of the policy of containment. ...read more.

But for LBJ it was political suicide to do it. Not only would if have lost any attempted re-election, but the democrats would have also lost the mid terms and would be branded as weak against communists. The US Government still believed that all communism was controlled by Moscow, and that it was intent on spreading around the world. Whilst this may have appeared to be true in the late 40's and 50's, the evidence for it in the 1960's was not so concrete. However no one in either of the democratic administrations bothered to review the policy. The world had become a relatively more stable place in the 1960's. However LBJ and JFK did not take this into consideration when looking at their foreign policy. There policies were all based on that of the same policies followed in the 1950's. They did alter the policies to Vietnam by escalating the situation, however this was all in keeping with idea of containment. In the short term JFK and LBJ did increase military involvement in Vietnam following there own polices. However these policies all came from the 1950's. So the overall long term reason for them getting further involved in Vietnam was that of the policies of the 1950's. ...read more.