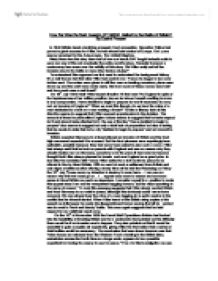 How Far Was the Nazi Invasion Of 1940/41 Halted by the Battle of Britain?

How Far Was the Nazi Invasion Of 1940/41 Halted by the Battle of Britain? By Daniel Prosser In 1940 Britain faced a terrifying prospect, Nazi occupation. Operation Yellow had proved a giant success for Hitler, he had almost total control of Europe. Only one enemy remained for the Axis powers, The United Kingdom. Many times has the story been told of how our heroic RAF fought fantastic odds to save our way of life and eventually the entire world's future. Recently however a controversy has arose over the validity of this story. Did Hitler really call off the invasion due to the battle or were other factors at play? To understand this argument we first need to understand the background history. It's a well known fact that after Hitler had control over France he began to turn ever further west. The orders were given to drill the men on landing procedure, plans were drawn up and the craft were made ready. But how much of these moves were bluff and how much was a real threat? On 16th July 1940 Adolf Hitler issued directive 16 that read "As England in spite of the hopelessness of her military position, has so far shown herself unwilling to come to any compromise, I have decided to begin to prepare for and if necessary to carry out, an invasion of England." ...read more.

A fact that is often overlooked is that for most of the war Germany did not posses enough ships to carry an invasion force, it was said that "the transport required for the forces specified by the general staff amounts to about 400 medium-sized steamers, with in addition a large collection of auxiliary vessels of the most varied nature, some of which must first be constructed" (and that was only for the first wave.) To even come close to such a number all other shipping activities would have to stop for the invasion, meaning that Germany would stop functioning. The Nazis also considered a large airborne invasion, but the Luftwaffe concluded on 30th December 1939 "the airborne landing planned will run into the strongest point of the enemy air defence which it will be impossible to eliminate. The planned operation can only be considered under conditions of absolute air superiority, and even then if surprise is endured" "A landing in England must be rejected". This is hardly the voice of a confident and ready force. Obviously angered by his situation Hitler issued directive 17 on 1st August 1940 that said "I have decided to carry on and intensify air and naval warfare against England in order to bring about her final defeat. The German air force with all available forces will destroy the English air force as soon as possible." ...read more.

It seems a little bit of a stretch to claim that the battle was the sole factor in the stopping of the invasion. It is conceivable that it was still in planning and may still be brought into use until, at the latest February 1941. With all the information collected I feel I can draw a reasonable conclusion. With so many quotes from Hitler claiming his admiration of England and his objection to the invasion of Britain I believe that Hitler was looking for other methods of conquest. He was certainly given many other reasons why invasion should be avoided, such as weather, danger, lack of materials, the high risk and political ramifications. Although his motives for invading Russia can be drawn into question, the fact that it seemed more of a priority to him can not. Operation Barbarossa may have been undertaken as a last effort to scare Britain into surrender or as a way to expand German territories futher, but either way it seems to me that its failure was the decisive factor in Britain's survival. The fact that the Battle of Britain was still underway while the planning of operation Barbarossa had begun seems to destroy the much beloved image of the fighting RAF being the sole saviours of Britain, in fact it would be more sensible to thank the greed, bad planning and egotism of the Nazi infrastructure. ...read more.