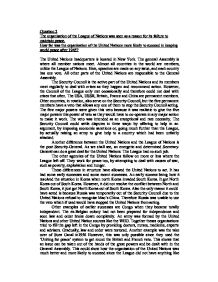 How far was the organisation of the United Nations more likely to succeed in keeping world peace after 1945?

Question 2 The organisation of the League of Nations was seen as a reason for its failure to maintain peace. How far was the organisation of the United Nations more likely to succeed in keeping world peace after 1945? The United Nations headquarters is located in New York. The general Assembly is where all member nations meet. Almost all countries in the world are members, unlike the League of Nations. Here, speeches are made on any issue, and each country has one vote. All other parts of the United Nations are responsible to the General Assembly. The Security Council is the active part of the United Nations and its members meet regularly to deal with crises as they happen and recommend action. However, the Council of the League only met occasionally and therefore could not deal with crises that often. The USA, USSR, Britain, France and China are permanent members. ...read more.

They work for peace too, by attempting to deal with causes of war, such as poverty, exploitation and hunger. These differences in structure have allowed the United Nations to act. It has had some early successes and some recent successes. An early success being how it resolved the situation in Korea when north Korea invaded South Korea. It got North Korea out of South Korea. However, it did not resolve the conflict between North and South Korea, it just got North Korea out of South Korea. Also the only reason it could have acted is because Russia was temporarily out of the Security Council due to the United Nations refusal to recognise Mao's China. Therefore Russia was unable to use the veto which if used would have stopped the United Nations from acting. Other examples of earlier successes are Congo when they became totally independent. The ex-Belgian colony had not been prepared for independence and soon law and order broke down completely. ...read more.

However, the organisation has had some recent failures. It failed to play any significant part in the Cuban crisis of 1962, the soviet invasion of Afghanistan in 1979, or the Falklands war of 1982. However, the United Nations has had some recent successes, for example Somalia in the 1990s. Some of the failures of the organisation were not its direct fault. This is because when the cold war was being played out in the Security Council. In the 1940s the western powers had a majority in the United Nations. The United Nations could not act as well because of the lack of unanimity among its permanent members. The organisation now has to cope with new problems occurring such as the September the eleventh tragedy. Now that the cold war is over the United Nations should be able to act more effectively. However, this has not been entirely the case. It has failed to stop international terrorism and it has failed to keep peace. For example the Gulf war. ...read more.