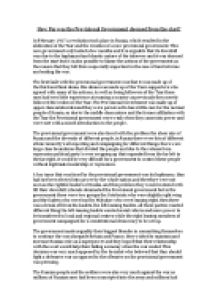 How far was the Provisional Government of Russia doomed from the start?

﻿How Far was the Provisional Government doomed from the start? In February 1917 a revolution took place in Russia, which resulted in the abdication of the Tsar and the creation of a new provisional government. This new government only lasted a few months and it is arguable that its downfall was due to the haphazard and chaotic nature of the takeover and it was doomed from the start but it is also possible to blame the actions of the government as the reason that they fell this is especially important in the case of land reforms and ending the war. The first fault with the provisional government was that it was made up of the third and final duma, this duma was made up of the Tsars supporters who agreed with many of his actions. As well as being followers of the Tsar these men had very little experience at running a country as previously they merely followed the wishes of the Tsar. The Provisional Government was made up of upper class aristocrats and they were perceived to have little care for the normal people of Russia, so due to the middle class nature and the former affiliation with the Tsar the Provisional government were weak when they came into power and were met with a mixed introduction to the people. ...read more.

The economic problems faced by the government worsened and in August the government increased the price of grain by 100% in order to persuade the peasants to sell their grain for consumption in the city, this was unsuccessful. The government tried to resolve the grain problem by sending out brigades into the countryside to requisition grain, but this only made the peasants more hostile. As a result of the economy?s consistent decline strikes sprung up around the country and many factories were taken over by workers committees. The workers demanded that the government controlled prices, but the government showed its upper class favouritism by siding with the Industrialists and not changing the prices. This once again emphasised the class divide and the split between the upper class government and the people. By may 1917 there was much unrest within the peasants, the government had promised land reforms but was with holding them till the end of the war, in frustrati`asxon many peasants just seized land unlawfully. They also took to seizing livestock, timber and machinery. During the summer there were 237 cases of land seizure this shows the frustration that the peasants were harbouring and shows why the provisional government lost the support of the peasants. The demands of the National minority?s was also a key failure point after the abdication of the Tsar both the poles and ...read more.

At this point it was arguable that the downfall of the provisional government was inevitable, it was the October revolution that was the nail in the Provisional Governments coffin. The revolution highlighted the weakness and lack of control held by the Provisional Government when they took Petrograd with limited opposition. This also displayed the lack of support and ineffiency of the government. While I have outlined a number of factors that ultimately contributed to the downfall of the Provisional Government, whether it was doomed from the start is questionable. Certainly the government started out in a weak and shaky position with severe rifts within the government. They also made many blunders that lost them the support of the public such as continuing the war, not holding elections, not introducing land reforms and the Kornilov affair. In conclusion I have decided that while the provisional government came into power in a precarious position they were by no means doomed to failure, as was shown after the July days they had the potential to gain the support of the people but never carried it through. Instead I believe that the downfall of the Provisional Government was due to their determination and stubbiness to carry on the war and their failure to see what the people want, if they had introduced Land reforms and stabilized the economy then it is arguable that they would have been able to remain in control for much longer. ...read more.