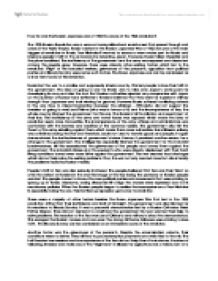 How far was the Russian Japanese war of 1905 the cause of the 1905 revolution?

How far was the Russian Japanese war of 1905 the cause of the 1905 revolution? The 1905 Russian Revolution was a wave of mass political and social unrest that spread through vast areas of the Tsarist Empire. Russia's defeat in the Russian Japanese War of 1905 was one of the main triggers of revolution in Russia. Tsar Nicholas II wanted to secure a warm water port for Russia and improve people's faith in the autocracy by defeating Japan. However, Russia failed miserably and the plans backfired. The inefficiency of the government and the army was exposed and discontent among the people grew. However, there were already other existing factors which led to the revolution. Plight of the industrial workers, grievances of the peasants, opposition from political parties and Bloody Sunday were some such factors. The Russo Japanese war can be considered as a short term factor of this revolution. Russia lost the war to a smaller and supposedly inferior country. ...read more.

Thus, the war not only created more but also intensify the problems faced by Russian masses. People's faith in Tsar was also seriously shattered. The people believed that Tsar was their 'God' so after the defeat of Russians in the war this image of the Tsar being the protector of Russian people was lost. The people turned to favour the new political parties and movements that were starting to sprang up in Russia. Moreover, during Alexander III's reign the masses were repressed due to his reactionary policies. When the Russian people began to realise the incompetence of Tsar Nicholas II, especially during the war, their bottled up repression gave way to revolution. There were a majority of other factors besides the Russo Japanese War that led to the 1905 revolution. Other than their inefficiency and lack of hindsight, the government was also blamed for its reactions to Bloody Sunday. It was a peaceful demonstration led by a Russian Orthodox Priest Father Gapon. ...read more.

The Marxists were particularly keen on overthrowing the Tsar so as to complete all stages to reach communism as outlined in the Communist Manifesto by Karl Marx. The liberal parties asked for a constitutional monarchy. Four parties rose to dominance - the Populists, the Social Revolutionaries, the Social Democrats and the Liberals. These parties offered to fill the vacuum created by the ineffective Tsarist policies and promised people hope. These parties were the ones who were ultimately elected by the people in the First Duma. In conclusion, the Russo Japanese War was merely a catalyst for the Russian revolution in 1905. It magnified the already existing problems of the peasants, fueled the urban proletariat, and decreased the confidence the people had in the Government even more. The image of the noble and powerful Tsar was shattered. It is also true that without the war, the government might not have felt the threat of the army deserting them and joining the revolutionaries. The full support of the army might could have made crushing the revolution easy for the Government. However, I think that the revolution would have happened anyway. Bloody Sunday was the main trigger of the revolution. ...read more.