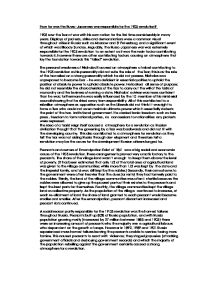 How far was the Russo-Japanese war responsible for the 1905 revolution? 1905 saw the Tsar at war with his own nation for the first time considerably in many years. Displays of protests, strike and demonstrations were a common visual throughout cities in Russia such as Moscow and St Petersburg and a significant event of which was Bloody Sunday. Arguably, the Russo-Japanese war was extremely responsible for the 1905 revolution to an extent as it was the main factor contributing towards it, however there are other contributing factors causing an atmosphere that lay the foundation towards this "failed" revolution. The personal weakness of Nicholas II caused an atmosphere of rebel contributing to the 1905 revolution as his personality did not suite the role of the Tsar; this is as the role of the tsar relied on a strong personality which he did not possess. Nicholas was unprepared to become Tsar - he was deficient in essential qualities to uphold the position of absolute power to uphold absolute power. He lacked all sense of purpose; he did not resemble the characteristics of the Tsar to carry out the will of the tasks of monarchy and the business of running a state. ...read more.

Fourthly, the village communities kept the village land as collective property. As the population of the village continued to increase, at each re-allotment of land the share of land granted to each peasant would become smaller and smaller. After the emancipation, peasant discontent increased and peasant riots continued. A social reason partly responsible for the 1905 revolution was the harvest failures throughout Russia. Peasants built up 80% of Russia population, and with Russia population growing vastly (increased by 27 million between 1885 and 1905) there were an increasing amount of peasants who the majority were agricultural labours who dependent on the growth of crops. However in 1892, 1989 and 1901 Russia experienced mass harvest failures leaving the peasants unable to service facing mass famine. This caused peasants to react with violence; they staged jaqueries (attacking government officials and destroying government records) and which the majority of the population rebelling against the government certainly caused a strong atmosphere for a revolution. Another social factor contributing to a revolutionary atmosphere was the conditions that the peasants and workers lived and worked in. Workers worked on average 11 hours a day and 10 hours on a Saturday conditions of the factories were extremely poor with no concern for health and safety they tried to improver this by attempting to form a trade union but owner banned this. ...read more.

All these factors caused a atmosphere towards a revolution however the Russo-Japanese war was the essential and key cause for the 1905 revolution. The Outbreak of the Russo-Japanese war was the key factor causing the 1905 revolution. The war was a humiliating defeat for Russia, strategically she should of won as she had a larger military force by far and the sheer fact that and island of Japan could defeat the largest country in the world this caused national disgrace to Russian citizens. This lead to demonstrations and disorders from civilians in cities such as Warsaw, Riga and Baku. The governor of Finland and the hated Minister of Interior, Plehve and the Tsars own uncle - Grand Duke Sergei, were assassinated by socialist revolutionary combat squads. Union of Liberation formed anti-government meetings through out the country and demanded the abolition of the autocracy and the setting up of a parliament. The war also caused shortages of food and fuel, high prices and mass unemployment which resulted in massive discontent with the citizens of Russia , Russian citizens felt this as the final straw and were ready for a revolution. In conclusion the Russo-Japanese war was key contributor towards to 1905 revolution however this is only as a result of an atmosphere for a revolution caused by other factors leading up to the 1905 revolution. ...read more.