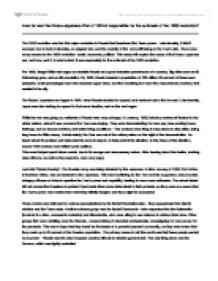 How far was the Russo-Japanese war to blame for the outbreak of 1905?

Other groups that were rebelling were the Liberals - compromising of educated professionals, campaigning for more power for the peasants. This was in hope that they would be the leader of a powerful peasant community, as they were aware that they made up to 80 percent of the Russian population. The primary cause for all this revolt was that these people wanted more power - Russia was the only European country without an elective government. The only thing close was the Zemsva, which was tightly controlled. As mentioned above, bloody Sunday was a key event in promoting further pushes for revolution. Such one happened in the February of 1905. Around 400,000 workers went on strike, as a response to the events of Bloody Sunday. Unlike before, the workers set up Soviets- groups to organise and plan their strikes-, which made the strike even more successful. By demonstrating in industrial centres, like St. Petersburg and Moscow, they managed to cripple Russia. They were joined by the Railway workers in October. The government now considered this serious, for the railways were an integral part of Russia's industry, and armed forces. ...read more.

The Russian army was well known for being grossly under-equipped, and at a disadvantage. Despite the heavily-publicised mutinies, the vast majority of the army did not turn against the Tsar. Concluding, no particular event sparked the revolution 0f 1905. While there were social, political, and economic causes, such as the peasants suffering famines, or the poor treatment given to the industrial workers in cities, the Russo-Japanese war was merely further encouragement for the strikers, a chance to take action now whilst the Tsar and the people in power were weak, and feeling humiliated. If the war was to happen on it's own, without the rest of the contributing factors, no strikes would of taken place. The defeat in the war was not affecting the Russians directly enough, to begin the revolution of 1905. In conclusion, I think the war had some relevance to the events of 1905, in encouraging the rebellion, but the failure of Russia at war was not significant enough to affect the outbreaks of the people in Russia. They were rebelling against poor living conditions, aswell as the social, political, and economic conditions. To sum up, I think the Russo-Japanese war was only responsible for the 1905 outbreak to a limited extent. ...read more.