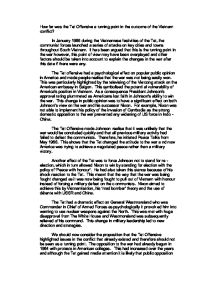 How far was the Tet Offensive a turning point in the outcome of the Vietnam conflict?

How far was the Tet Offensive a turning point in the outcome of the Vietnam conflict? In January 1968 during the Vietnamese festivities of the Tet, the communist forces launched a series of attacks on key cities and towns throughout South Vietnam. It has been argued that this is the turning point in the war however, this point of view may have been overplayed and other factors should be taken into account to explain the changes in the war after this date if there were any. The Tet offensive had a psychological effect on popular public opinion in America and made people realise that the war was not being easily won. This was particularly highlighted by the televising of the Vietcong attack on the American embassy in Saigon. This symbolised the potential vulnerability of America's position in Vietnam. As a consequence President Johnson's approval rating plummeted as Americans lost faith in Johnson's ability to win the war. ...read more.

This meant that the way that the war was being fought changed as it was now being fought to pull out of Vietnam with honour instead of forcing a military defeat on the communists. Nixon aimed to achieve this by Vietnamisation, his 'mad bomber' theory and the use of d�tente with USSR and China. The Tet had a dramatic effect on General Westmoreland who was Commander in Chief of Armed Forces as psychologically it provoked him into wanting to use nuclear weapons against the North. This was met with huge disapproval from The White House and Westmoreland was subsequently relieved of his command. This change in military leadership led to new direction and strategies. We should now consider the proposition that the Tet Offensive highlighted issues in the conflict that already existed and therefore should not be seen as a turning point. The opposition to the war had already begun in 1964 with protests in American colleges. ...read more.

After MacNamara's breakdown Clark Clifford was appointed Secretary of Defence and this change in personnel signalled a change in American attitude in Vietnam as Clifford didn't believe in the domino theory. This change would have come about regardless of the Tet as Nixon also adopted this view that communism was not a monolithic threat to the free world and saw victory in Vietnam more as a point of US pride than strategic importance. The outcome of the war was mostly affected by Nixon's realisation that it would be impossible to continue fighting much longer. He realised that the US people and congress would no longer support and bankroll a war that it was unlikely the US military could win. He therefore tried to negotiate peace terms, which would allow US to pull out without losing face. This attitude had already been decided before the Tet therefore although it was a shock to America it had little effect on the outcome of the war. ...read more.