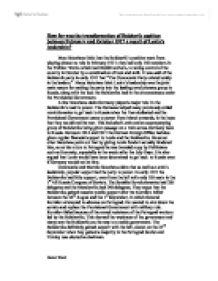 How far was the transformation of Bolshevik position between February and October 1917 a result of Lenin's leadership? Most historians think that the Bolshevik's position went from playing almost no role in February 1917; they had only 150 members in the Pultilov Works which had 20,000 workers, to taking control of the country in October by a combination of luck and skill. It was said of the Bolshevik party in early 1917 that "The Communist Party existed solely in the leaders." Many historians think Lenin's leadership was the joint main reason for making the party into the leading revolutionary group in Russia, along with the luck the Bolsheviks had in the circumstances under the Provisional Government. A few historians claim Germany played a major role in the Bolshevik's road to power. The Germans helped many previously exiled revolutionaries to get back to Russia when the Tsar abdicated and the Provisional Government came to power from March onwards, in the hope that they would end the war. This included Lenin and an accompanying group of Bolsheviks being given passage on a train across Germany back to Russia. Between 1914 and 1917 the German Foreign Office had also given regular financial support to Lenin and the Bolsheviks. However other historians point out that by giving Lenin funds it actually hindered him, as on his return to Petrograd he was branded a spy by Politicians such as Kerensky, especially in the weeks after the July Days. ...read more.

Trotsky was also chairman of the Petrograd Soviet from 25th September onwards and became president of the Military Revolutionary Committee set up on the 12th October by the Petrograd Soviet. This is because Trotsky virtually ran the Bolshevik Party between the 6th July and 7th October, as Lenin was in hiding on an island after the failure of the July Days. Trotsky was also a good charismatic speaker unlike Lenin who had a heavy German accent and bad jokes; this meant he was very active having nightly meetings in Petrograd. When he was arrested briefly after the July Days it was a sharp setback for the Bolsheviks. Other historians disagree with this. They make the point that Trotsky only joined the Bolshevik Party in the summer, meaning that although he did play a vital role it was only short term leading up to the coup and Lenin was in charge for a lot longer. By the time Trotsky joined Lenin had already thought out his policy and strategies and Trotsky was just his tool. Many of these historians think that Lenin's genius was the key. Before Lenin returned the soviets were not considered as an alternative form of government to the Provisional Government, as many held positions in both the Provisional Government and the Congress of Soviets, such as Kerensky. Lenin saw the potential of the soviets as a ready made government structure, and came up with the slogan "All power to the Soviets". ...read more.

The government had little control over the armed forces, on the 2nd March the Petrograd Soviet issued "Order Number 1" declaring that any decrees made by the Provisional Government on military affairs were only binding if they were approved by the Petrograd Soviet, it also made saluting optional. It was lucky that after the failure of the July Days the government crack down on the Bolsheviks was only half-hearted with the Sixth Bolshevik Party Conference to go ahead, Kerensky could have completely shut down the Bolsheviks but chose not to. The lack of control the government had on military forces in October was probably one of the biggest factors of Bolshevik success as well as the fact that it was the government who armed the Bolsheviks in the Kornilov crisis. It was lucky that the Petrograd Soviet had gained a lot of respectability, support and authority whilst the Mensheviks and SRs held the majority. The support was shown by autumn when there were over 900 soviets in Russia and the soviets had authority with decrees such as "Order Number 1". It was also lucky that neither the Mensheviks or SRs attempted to take power whilst they were the dominant figures in the soviets. Most historians would agree with the evidence that it was Lenin's leadership skills combined with the luck the Bolshevik party had in the failings of the Provisional Government and how the events out of their control went that brought the Bolsheviks to power between February and October 1917. ?? ?? ?? ?? Daniel Ward ...read more.