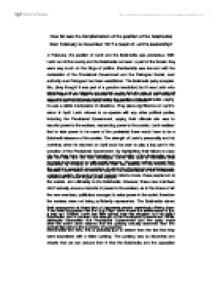 How far was the transformation of the position of the Bolsheviks from February to December 1917 a result of Lenin's leadership?

How far was the transformation of the position of the Bolsheviks from February to December 1917 a result of Lenin's leadership? In February, the position of Lenin and the Bolsheviks was precarious. With Lenin out of the country and the Bolsheviks not even a part of the Soviet, they were very much on the fringe of politics. Membership was low and with the declaration of the Provisional Government and the Petrograd Soviet, dual authority over Petrograd had been established. The Bolshevik party accepted this, (they thought it was part of a genuine revolution) but it was Lenin who would reject it and begin a process to destroy it, his ultimate aim being to replace it with his Bolshevik party, which happened in October. Historians such as Liberals and Soviets agree that the role of Lenin himself was of huge importance in transforming the position of the Bolsheviks, saying he was a skilful manipulator of situations. ...read more.

The lack of much needed reforms made these people turn to the soviets, and ultimately to the Bolsheviks. However, these new members didn't actually ensure a transfer of power to the workers, as in the chaos of all the new members, politicians managed to seize power in the soviet; therefore the workers were not being sufficiently represented. The Bolsheviks aimed their propaganda at these kind of desperate people, seemingly offering them a way out. Overall, Lenin had little control over this situation, but his skilful strategies discredited the Provisional Government and the party made substantial gains in the numbers of supporters. It has been suggested that the 'July Days' crisis shows the weaknesses of the Bolsheviks, and in contrast, the strength of the Provisional Government. While after the event Lenin claimed that the uprising actually stemmed from the Mensheviks and SRs, this is probably just to detract from the fact that they were associated with a failed uprising. ...read more.

Kerensky later acknowledged that the affair had been the 'prelude to the October Revolution', and from it Lenin could see how the Government was defenceless against military threat. In this way, Lenin's leadership appears to be a considerable factor in the changing fortunes of the party, as he was slowly undermining Kerensky by playing on his inability to stop the social unrest in Petrograd and profiting from it. Here, social factors are clearly a large issue, as well as the way Lenin was able to exploit the situation. This ties in with revisionist and liberal views, as both aspects are merged. Although great importance must be placed on the social situation that Lenin was in, so must the fact that Lenin was cleverly able to manipulate many situations, from which he and the party gained much support. Although revisionists tend to underestimate the amount of support for the Bolsheviks, they did actually profit from exposing the weaknesses of the Provisional Government and from the Kornilov affair. Therefore, the revisionist view must be accepted. ...read more.