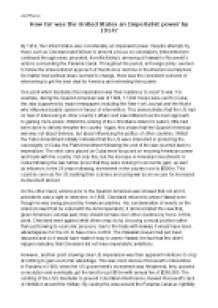 How far was the United States an Imperialist power by 1914?

﻿Joel Pearce How far was the United States an Imperialist power by 1914? By 1914, the United States was considerably an Imperialist power. Despite attempts by those such as Cleveland and Wilson to prevent a focus on colonialism, interventionism continued through every president, from McKinley?s annexing of Hawaii to Roosevelt?s actions surrounding the Panama Canal. Throughout the period, all foreign policy seemed to follow the interventionist approach of the Monroe doctrine in the Western Hemisphere. No matter how political ideas seemed to change, there was the consistent outcome of intervening to get the best deal for America and extending their power. One point which illustrates this imperialism was their readiness to resort to war. For example, during the Spanish American war of 1898, 17,000 troops were sent to Cuba; this was supported by major newspapers including the New York Journal and the World who influenced public opinion in favour of intervention. This demonstrates that the US had no fear of intervening in other country?s affairs and saw militarism as the best approach to gaining more power. Whilst the sinking of the USS Maine killed US sailors, little had been done to directly threaten the country. ...read more.

The sending of the USS Nashville to prevent Columbian interference showed Roosevelt?s lack of inhibition around the military. By seeing the area around the Panama Canal as rightfully theirs, the US showed immense arrogance and greed. As with the Spanish American war, there was no threat to their country, but the American government used the excuse of spreading democracy and freedom to assist themselves. Having control of such an important route was important for the US as this gave them influence over European trade. Therefore, these actions could be seen as building America?s position as a world power and increasing the dominance on their sphere of influence. This is linked to William Howard Taft?s ideas of ?Dollar Diplomacy? as this was also connecting foreign policy with trade and investment Another example of American imperialism during this period were Taft?s ideas about using economic influence to expand the power of the US as an imperialist nation. As is demonstrated by the fact that American banks took over financial control of places such as Honduras, Haiti and Nicaragua, Taft thought expanding to new markets was essential. Whilst at first this wasn?t militaristic imperialism, it was the same idea of America extending their control over smaller countries. ...read more.

This supported his famous idea that in diplomacy you should ?speak softly but carry a big stick?; whilst he was willing to use force, he still believed that peaceful solutions with greater self-determination were the better option. Winning the Nobel Peace Prize also demonstrates that, on the international stage, America were not judged as an imperialistic power. Instead US leaders were being recognised as having a positive influence on the world. Despite Roosevelt's aggressive ideas in some areas of foreign policy, at times like this he seemed to echo the progressivism he showed in domestic politics. Overall it is clear that the United States was considerably an imperialist power by 1914. Whilst presidents had different ideologies, the outcome of their actions were very often imperialistic. The few occasions where imperialism wasn?t initially shown, such as in Hawaii and with Wilson?s moral diplomacy, in the end America resorted to defending their empire. The continued use of the military to maintain power also demonstrates that the ambition for control outweighed the ideology on which presidents were elected. Even though the Democrats tried to display themselves as focussed on the rights to self-determination, Democratic presidents showed as much foreign intervention as their Republican counter parts. To conclude, by 1914 the United States had demonstrated that they had ambitions for an empire and were not afraid to use any means to achieve it. ...read more.