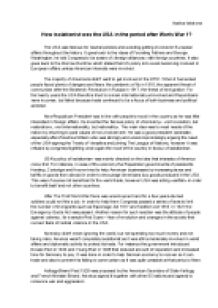 How far was the USA isolationist after WW1?

ï»¿Azaliya Iskakova How isolationist was the USA in the period after Worls War 1? The USA was famous for neutral policies and avoiding getting involved in European affairs throughout the history. It goes back to the ideas of Founding Fathers and George Washington, he told Congress to be aware of «foreign alliances» with foreign countries. It also goes back to the Monroe Doctrine which stated that US policy is to avoid becoming involved in European affairs unless American interests were involved. The majority of Americans didn't want to get involved in the WW1. When it had ended people faced plenty of dangers and fears: the pandemic of flu in 1918, the apparent threat of communism after the Bolshevik Revolution in Russia in 1917, the threat of immigration. For the twenty years the USA therefore tried to remain internationally uninvolved and Republicans were in power, but failed because trade continued to be a focus of both business and political ambition. ...read more.

This was of course not beneficial for the world trade, however USA was acting «selfish» in order to benefit itself and not other countries. After The First World War there was unemloyment and for a few years eturned soldiers could not find a job. In order to help them Congress passed a series of laws to limit the number of immigrants such as Espionage Act 1917 and Sedition Act 1918. In 1921 the Emergency Quota Act was passed. Another reason for such reaction was the attitude of people against «aliens», for example Red Scare – fear of revolution and cnanges in the society that revived fears of radical violence in the USA. Normalcy didn't mean ignoring the world, but not spending too much money and not taking risks. America wasn't completely isolationist as it was still conciderably involved in world affairs and diplomatic activity to protect its trade. ...read more.

This was similar to Taft Dollar Diplomacy proving that America was not completely isolationist. Mexico was the nearest and probably the richest of America's neighbors. America was interested in Mexico because of its oi fields and got involved to protect its personal where disputes in Mexico occured. The USA also protested about Japanese expansion into China 1928 and got involved in the Far East disputes. Washington Naval Conference 1921-22 was aimed at controlling Japanese power especially was concerned about it's navy expansion. Four Power Pact included Japan Great Britain, France and the USA agreeing that China should stay neutral. Also Five Power Naval Limitation Treaty was a 10 year holiday in battleship building to try and avoid naval arms race. To sum up it is difficult to say that the USA was 100 per cent neutral at that period after WW1 as even though it tried to be not involved in world affairs, situation with trade and political ambition was still present. 750 words ...read more.