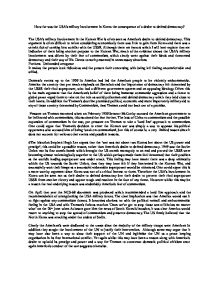 How far was the USA's military involvement in Korea the consequence of a desire to defend democracy?

How far was the USA's military involvement in Korea the consequence of a desire to defend democracy? The USA's military involvement in the Korean War is often seen as America's desire to defend democracy. This argument is often difficult to refute considering economically there was little to gain from Korea and there was a certain risk of coming into conflict with the USSR. Although there are factors which I will later explore that are indicative of there being another purpose to the Korean War, much of the evidence shows the USA's military involvement was driven by their fear of communism, which clearly went against their ideals and threatened democracy and their way of life. Detest conceit presented in unnecessary situations Furthers Unfounded arrogance It makes the person look ridiculous and the person their conversing with being left feeling uncomfortable and stifled. Domestic events up to the 1950 in America had led the American people to be violently anti-communist. America the country that put much emphasis on liberation and the importance of democracy felt threatened by the USSR their rival superpower, who had a different government system and an opposing ideology. Often this is the main argument that the American's belief of there being immense communist aggression and a threat to global peace urged them to take on the role as world policeman and defend democracy which they held close to their hearts. ...read more.

The clear implication was that America would use it to fight against any communism threats. It becomes obvious tat with the political turmoil and anti-communist feeling in the USA and with Truman's furious reaction 'Dean we've got to stop those son of bitches no matter what' on the 26th June when Acheson gave him the news of South Korea's invasion, it was clear America would resort to anything to stop the spread of communism and preserve democracy. The US firmly believed that the North Korea was attacking under the orders of Stalin. Clearly the American's were dedicated to the cause since the majority of the military troops were American in addition they sought the involvement of the UN to justify their intervention. Although some may argue that it may have also been a way to show their support of the UN and legitimise the UN as a peace keeping organisation in its first international conflict. Yet again whilst this may have been a reason along with America's desire to uphold its prestige and power and a way for Truman to counteract domestic political criticism once again America's conduct of the war suggests otherwise. The US's actions in Korea were dictated by the policy of containment. The domino theory (if one country fell to communism then a chain reaction would follow leading to the loss of other countries) ...read more.

The United States never calculated the costs involved. If the conflict had ended at the 38th parallel in 1950, it could have been considered a stunning victory. But MacArthur and the UN. dreadfully underestimated the result of their actions. The UN. failed to understand that communist China would not tolerate UN. forces on its borders. The anti-communist hysteria in the United States during and after the war, made the U.S. leaders stockpile nuclear weapons. The Soviets responded by stockpiling their own nuclear weapons, thus creating a "Balance of Terror".34 The world became much more dangerous after the Korean War because of the volume of nuclear weapons produced. High taxes were imposed upon the American people to keep up the nuclear race with the Soviets. Within a year or so, America had turned its back on the Korean War. No one wanted to remember a war which cost so much to accomplish so little. The dead were just simply forgotten in the fast modern world. The lessons of the war were also forgotten. As the last troops left Korea, another conflict started in a nearby Asian land, Vietnam. If we had learned from W.W.II, we would not have fought the Korean War. If we had learned from the Korean War, we would have not fought Vietnam. Often the decision to cross the 38th parallel and invade North Korea proved to be both a military and political blunder for the USA during the course of the war. ...read more.