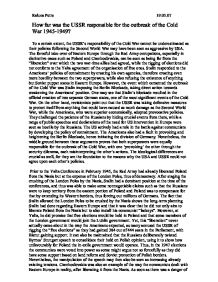 How far was the USSR responsible for the outbreak of the Cold War?

How far was the USSR responsible for the outbreak of the Cold War 1945-1949? To a certain extent, the USSR's responsibility of the Cold War cannot be underestimated as their policies following the Second World War may have been seen as aggressive by USA. The forceful take-over of Eastern Europe through the Red Army occupations, especially in distinctive cases such as Poland and Czechoslovakia, can be seen as being far from the "liberation" over which the two war-time allies had agreed, while the rigging of elections did not conform to the Yalta agreement of the organisation of free ones. Stalin responded to the Americans' policies of containment by creating his own agencies, therefore creating even more hostility between the two superpowers, while also refusing the existence of anything but Soviet puppet states in Eastern Europe. However, the event which cemented the outbreak of the Cold War was Stalin imposing the Berlin Blockade, taking direct action towards weakening the Americans' position. One may see that Stalin's blockade resulted in the official creation of two separate German states, one of the most significant events of the Cold War. On the other hand, revisionists point out that the USSR was taking defensive measures to protect itself from anything that could have caused as much damage as the Second World War, while the Americans, who were superior economically, adopted provocative policies. They challenged the patience of the Russians by hiding crucial events from them, while a range of public speeches and declarations of the need for US intervention in Europe were seen as hostile by the Russians. The US actively had a role in the battle against communism by developing the policy of containment. The Americans also had a fault in provoking and heightening the Berlin Blockade, hence initiating the division of Germany. Nonetheless, the middle ground between these arguments proves that both superpowers were equally responsible for the outbreak of the Cold War, with one 'provoking' the other through the security dilemma, each misinterpreting the other's actions. ...read more.

Thus, the secret discussions at the London Conference about the German economy ruptured relations between the USSR and USA, as in March 1948 the Soviet representatives walked out of the Allied Control Council after demanding to be told what had been agreed in London. The problems were exacerbated by the Western Allies' plan of introducing a new currency, printing it and secretly bringing it over to Western Germany, catching the USSR completely unprepared. Thus the introduction of the Deutschmark was the catalyst of the blockade. From this point of view, we can actually say that the Americans initiated the division of Germany by giving no other choice to Stalin but to impose a blockade. Furthermore, American attitudes during the blockade may also be seen as helping worsen the relation between the two superpowers instead of trying to improve it. Enormous effort was put into the airlift, which tried to feed and supply the West Berliners so that by December 1948, the USAF and RAF were able to deliver up to 6000 tonnes of food per day with planes flying every 90 seconds. Western leaders feared that to Germans the Soviet zone in Germany might seem more appealing if the Western allies did not try and do anything; they believed that, as General Clay had earlier declared, there was no choice between being a communist on 1500 calories a day and a capitalist on 1000. Therefore, the Americans had to try and impede Berliners from embracing communism. However, while the US cannot be blamed for wanting to keep the West Berliners fed, she did transform the success of the airlift into a major Western propaganda coup, with 300 000 people gathering in front of the Reichstag around Reuter, the West Berlin mayor, who publicly begged the West to "keep going". This psychological boost for the western powers proved to be detrimental to East-West relations which reached their worst point since 1945. ...read more.

of expansion, seeing the USSR as naturally expansionist and committed to spreading revolution, rather than considering their needs for security following the disasters of the War. Other historians see the defeat of Germany and the weakening effects the war had on most European countries as the cause to the outbreak of the Cold War. There was an enormous power vacuum left in the centre of Europe and the Cold War developed as a result of the growth of two opposing superpowers, who both wanted to fill that power vacuum but one would not tolerate the other. In conclusion, what became a globalised, militarized confrontation in which the two superpowers led alliance systems that threatened nuclear conflagration (both soon emerging to test the hydrogen bomb following 1948-49 events) for the next 30 years, I think was caused due to hostility and provocation from both sides. Clearly the aggressive take-over of Eastern Europe and the hostile policies implemented there such as the purging of any possible political opponents to Soviet-style communism which created apprehensiveness in the West can only be owed to USSR policies. Furthermore, the fact that Stalin chose to respond to US 'provocations' in Germany showed that he was ready to retaliate, even if not under the form of a new war as neither of the two superpowers was actually ready to wage a new war that could involve mass destruction. Strong responses from either side to the other's actions showed that neither was willing to back down and hence a "Cold War" between the two was inevitable. On the other hand, the Americans provoked the USSR using their economic advantage to develop policies which were considered to be hostile and expansionist by the communists. These considerations and assumptions made by both superpowers undoubtedly led to the outbreak of the Cold War, as it was difficult to see how two countries who were ideologically so different could agree with each other when not fighting a common enemy. ?? ?? ?? ?? Raluca Petre 19.05.07 ...read more.