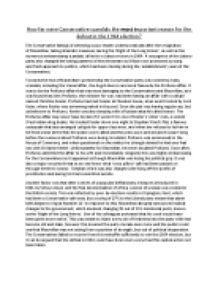 How far were Conservative scandals the most important reason for the defeat in the 1964 election?

﻿How far were Conservative scandals the most important reason for the defeat in the 1964 election? The Conservative failings of selecting a poor leader undemocratically after the resignation of Macmillan, taking dramatic measures during the ?Night of the Long Knives?, as well as the numerous embarrassing scandals, all led to a Labour victory in 1964. A resurgence of the Labour party also changed the voting patterns of the electorate as Wilson now promoted a young and fresh approach to politics, which had been missing during the ?establishment? years of the Conservatives. Towards the end of Macmillan's premiership the Conservative party was rocked by many scandals, including the Vassel affair, the Argyll divorce and most famously the Profumo affair. It was to be the Profumo affair that was most damaging to the Conservatives and Macmillan, as it was found that John Profumo, the minister for war, had been having an affair with a call girl named Christine Keeler. ...read more.

This was reflected by poor by-election results in Orpington, Kent, which had been a Conservative safe seat, but a swing of 27% to the Liberal party meant that alarm bells began to ring at Number 10. In response to this, Macmillan abruptly announced radical changes to the government, which involved changing 39 out of 101 ministerial posts, known as the ?Night of the Long Knives?. One of his colleagues protested that his cook would have been given more notice. This was meant to inject a new air of freshness into the party with had become old and stale, however this lowered the party morale even more and the public could see that Macmillan was not acting from a position of strength, but out of political desperation. The Conservatives failed to recover from this reshuffle sufficiently to win the 1964 election, but it can be argued that the defeat in 1964 could have been even worse had this radical action not been taken. ...read more.

Under Wilson the grey years of Gaitskell were over and he pressed forward on a modernising agenda. His aristocratic views and his ?white heat of technology? approach gave the electorate another option to the Conservatives which they had lacked for a long time. Wilson famously called the period of Conservative rule ?13 wasted years?. It is very easy to over credit Wilson and the Labour party for the election victory in 1964, but in the end they only won by 4 seats (this has led to some Conservatives believing that if Butler had been leader they may have won). It was more that the Conservatives lost the election rather than Labour winning it, unemployment was now over 800,000, which dented Macmillan's claim of ?never had it so good? and the 1959 election slogan ?life is better under the Conservatives. Don?t let Labour ruin it.? Poor growth rates along with unpopular taxes, and the harmful political scandals as well as the fact that the Conservatives were a constants target for satirists all played into Labour?s hands, and they therefore won on a very small majority. ...read more.