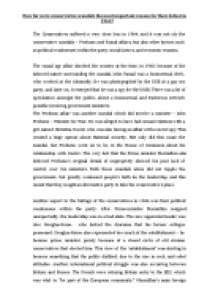 How far were Conservative scandals the most important reason for their defeat in 1964?

﻿How far were conservative scandals the most important reason for their defeat in 1964? The Consercatives suffered a very close loss in 1964, and it was not oly the conservative scandals ? Profumo and Vassal affairs, but also other factors such as political weaknesses within the party, social factors, and economic reasons. The vassal spy affair shocked the country at the time, in 1963, because of the tabooed nature surrounding the scandal. John Vassal was a homosexual clerk, who worked at the Admiralty. He was photographed by the KGB at a gay sex party, and later on, it emerged that he was a spy for the USSR. There was a lot of speculation amongst the public, about a homosexual and traitorous network possible involving government ministers. The Profumo affair was another scandal which did involve a minister ? John Profumo ? Minister for War. ...read more.

Douglas-Home also represented too much of the establishment ? he became prime minister purely because of a closed circle of old etonian conservatives that elected him. This view of the ?establishment? was starting to become something that the public disliked, due to the rise in rock, and rebel attitudes. Another international political struggle was also occurring between Britain and France. The French were refusing Britain entry to the EEC, which was vital to ?be part of the European community.? Macmillan?s main foreign policy aim was to join the EEC, so when the public saw him being rejected by Charles de Gaulle on a world wide scale, they saw him as weak, and unable to stand up to the French. It also sent out the message that unlike Labour, they didn?t have an aim, or even a foreign policy. ...read more.

What Wilson managed to do with expert skill was combine the party, and satisfy both sides. This showed the ?vision of change? in the party. The key thing to also take into account is that the Conservatives barely lost. It was four seats between Labour and Conservatives. So considering that the conservatives made a huge number of mistakes, and had scandals, they did well to not loose very many seats. In conclusion, I think that it was mainly down to the new leadership of Labour ? Harold Wilson. He ?rebranded? the Labour party into something new, and something that represented the people, the view of ?swingin? sixties? and rebel attitudes. Had Wilson not come along, the poor image of the Labour party would have continued, and despite the ill judgements of the conservatives, would have continued on a downward spiral. The scandals however, I think did lead to the tipping point of those final four seats. ...read more.