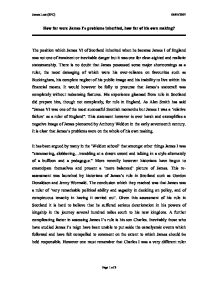 How far were James I's problems inherited, how far of his own making?

How far were James I's problems inherited, how far of his own making? The position which James VI of Scotland inherited when he became James I of England was not one of imminent or inevitable danger but it was one for clear-sighted and realistic statesmanship. There is no doubt that James possessed some major shortcomings as a ruler, the most damaging of which were his over-reliance on favourites such as Buckingham, his complete neglect of his public image and his inability to live within his financial means. It would however be folly to presume that James's statecraft was completely without redeeming features. His experience gleamed from rule in Scotland did prepare him, though not completely, for rule in England. As Alan Smith has said "James VI was one of the most successful Scottish monarchs but James I was a 'relative failure' as a ruler of England". This statement however is over harsh and exemplifies a negative image of James pioneered by Anthony Weldon in the early seventeenth century. It is clear that James's problems were on the whole of his own making. It has been argued by many in the 'Weldon school' that amongst other things James I was "stammering, slobbering...trembling at a drawn sword and talking in a style alternately of a buffoon and a pedagogue." More recently however historians have begun to emancipate themselves and present a 'more balanced' picture of James. This re-assessment was launched by historians of James's rule in Scotland such as Gordon Donaldson and Jenny Wormald. The conclusion which they reached was that James was a ruler of 'very remarkable political ability and sagacity in deciding on policy, and of conspicuous tenacity in having it carried out'. Given this assessment of his rule in Scotland it is hard to believe that he suffered serious deterioration in his powers of kingship in the journey several hundred miles south to his new kingdom. ...read more.

The king who had been bad at refusing suitors in Scotland was not better in England, but had much more to give. James I did view England as 'the promised land' and indeed Durston argues that even whilst journeying down in 1603 he believed that after years of toiling in a Scottish wilderness he would now be able to relax and enjoy the "abundant milk and honey available in England"12. He even described himself as "like a poor man wandering about for 40 years in a wilderness and barren soil who has now arrived in the land of promise"13. His frivolous attitude to money however did land the country with new and more grievous financial problems. It is clear that James did not adapt to the financial situation in England and that his preconceptions of his new realm as a 'land of bounty' clearly influenced his actions and beliefs. Although the economy was not in great stead at the start of his reign with the tax system being in tatters and the crown being chronically under-endowed, this in itself would not have posed a serious problem to the economic security of the realm. The problem lay in James's inability to control his extravagant spending and outrageous generosity. For example in 1607 James, rather than paying off the Crown debts, paid off those of his previous favourites Viscount Haddington, Lord Hay and the Earl of Montgomery which amassed to over �44,00014. Another key financial problem which was prevalent under James I was the fact that the English tax paying classes has manoeuvred themselves into the enviable position where they gave only sporadic and relatively meagre financial support to a monarchy which was expected to meet all its own peacetime expenses. The practice of selling off royal lands for quick injections of capital was a crucial part of Elizabethan financial balancing and continued on into James's reign. ...read more.