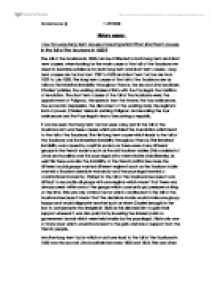 How far were long term causes more important than short term causes in the fall of the Bourbons in 1830?

The main event which was looked back on by the generation of 1830 would have been when the working class revolted and stormed the Bastille in 1789. This led to the fall of the Bourbons because it encouraged the working classes and gave them the confidence to revolt again because they had been set a revolutionary example by their predecessors. This was a minor factor which led to the fall of the Bourbons because it merely encouraged the working class to revolt instead of directly causing them to revolt. The final long term cause which led to the fall of the Bourbons in 1830 was the disbanding of the National Guard by Charles in 1827. This was when Charles disbanded the lower middle class National Guard because when he reviewed it he believed it acted in a disrespectful manner. This led to the fall of the Bourbons in 1830 because it meant that Charles would not have any means of putting down a revolution in the future because the National Guard was the force which the regime used within Paris. These long term causes of revolution primarily meant that by 1828 Charles had alienated the pays legal by showing himself as oppressive and trying to restore the ancien regime however although there was a great amount of opposition at this point in time there were very few who were actually willing to revolt. ...read more.