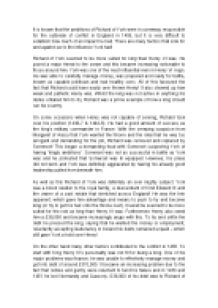 How far were Richard of York's ambitions responsible for the outbreak of war?

﻿It is known that the ambitions of Richard of York were in someway responsible for the outbreak of conflict in England in 1455, but it is very difficult to establish how much of an impact he had. There are many factors that side for and against as to the influence York had! Richard of York seemed to be more suited for king than Henry VI was. He posed a major threat to the crown and this became increasing noticeable to those around him. York was one of the most influential men in Henry VI reign. He was able to carefully manage money, was prepared and ready for battle, known as capable politician and had healthy sons. All of this favoured the fact that Richard could have easily over thrown Henry! It also showed up how weak and pathetic Henry was. Whilst the king was not active in anything his duties entailed him to do, Richard was a prime example of how a king should run his country. On some occasions when Henry was not capable of serving, Richard took over his position (1436-7 & 1440-5). He had a good amount of success as the king?s military commander in France. ...read more.

The bill of money became an accumulating factor, which provoked stress and anxiety across the country. Coupled with the fact that Henry was too generous with his assets, he was widely known for giving away land and other means of belongings, that the downfall he had started on slowly got bigger. Henry died in massive debt! Another fault of Henry?s part was that Henry was an under-mighty king. For the first 16 years of his reign Henry was under the influence of a select group of nobles tasked with the government of the kingdom and the prosecution of the war in France. Even when he reached his majority he was still prompted greatly by ?favourite? nobles. This led to tension and rivalry at court between the most powerful and ambitious nobles, which the king seemed unable to manage and control. As Henry misunderstood the seriousness of the bitter rivalry that grew between Richard of York and the Duke of Somerset. His failure to resolve and make amends with the two warring Dukes contributed to the outbreak of civil war. Henry had many problems with mental illness. In 1453 and 1455 he had 2 major breakdowns, although it is believed that he was never completely ?normal? in the first place. ...read more.

Margaret also saw Richard of York as a threat to her family. Having son already she worried that Richard would try and take control of the throne and she was going to do everything in her power to stop him. She persuaded Henry to change his role as advisor and aimed to ?strip him of his powers? before he could do the same to her baby! With Henry?s problems already rising, his wife being an unpopular queen was just adding extra fuel to the fire. Overall, Richard of York did have many aspects that meant that he posed threat and worry to the king and his men. However, there were never any recorded cases of York actually trying to overtake the throne; although there were many reasons why you could understand others wanting him out of his powerful position, you cannot say that York was solely to blame! There were some issues with the changing of his ambitions but they did not play as much of a vital role in the cause. One figure who adds conflict the idea that Richard of York was greatly to blame is King Henry! It is obviously noticeable that he was not a powerful leader and grouped with his wife the two did not have good means of ruling. In conclusion, Richard can only be blamed somewhat for the conflict in 1455 but many other factors play a much bigger role. ...read more.