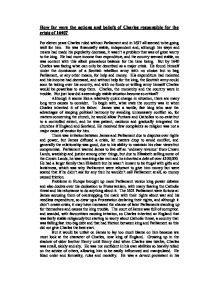 How far were the actions and beliefs of Charles responsible for the crisis of 1640?

How far were the actions and beliefs of Charles responsible for the crisis of 1640? For eleven years Charles ruled without Parliament and in 1637 all seemed to be going well for him. He was financially stable, independent and, although his ways and means had made his popularity decrease, it wasn't a problem that was of great worry to the king. He had more income than expenditure, and the country seemed stable, so was content with this albeit precarious balance for the time being. But by 1640 Charles was facing what can only be described as a major crisis. He found himself under the dominance of a Scottish rebellion army with no choice but to beg Parliament, or any other means, for help and money. His expenditure had rocketed and his income had decreased, and without help for the king, the Scottish army could soon be taking over his country, and with no funds or willing army himself Charles would be powerless to stop them. Charles, the monarchy and the country were in trouble. But just how did a seemingly stable situation become so critical? Although it seems like a relatively quick change in situation, there are many long term causes to consider. To begin with, what state the country was in when Charles inherited it of his father. James was a tactile, fair king who saw the advantages of keeping political harmony by avoiding unnecessary conflict so, for matters concerning the church, he would allow Puritans and Catholics to co-exist but to a controlled extent, and he was patient, cautious and gradually integrated the churches if England and Scotland. He received few complaints so religion was not a major cause of tension for him. ...read more.

To rule without them for long periods of time was not unusual because if a king could finance himself then there was little need for Parliament as they were not an essential part of everyday government. However at this time, Charles is not highly popular or greatly trusted and his people are worried about his ideas for reform because if he could rule without Parliament, he could make whatever changes he desired and there would be nothing anyone could do about it. Instead of being cautious and careful, Charles, who unlike James was keenly involved in administration and attended meetings, first move was to introduce the Book Of Orders, consisting of 314 books of instructions to Justices of the Peace on how to run the country, from beggars laws to trade and goods control. Surprisingly administration seemed to be the area Charles succeeded in as the Book Of Orders was well received and improved English life. But even in this area, Charles could not settle for a tactful and calm situation, appointing William Laud as his advisor, who was instrumental in the religious conflicts that contributed to the crisis of 1640. Charles came to the throne with firm religious beliefs and, unlike James, he was not willing to compromise. Laud became Archbishop of Canterbury in 1633 and straight away began to make changes to the services, preaching and the teachings, emphasising Charles' love for ritual and communal worship in replacement for the personal Bible faith. Churches were adorned with lavish decoration, the altar was moved to a position out of reach of the public and echoing Catholic style, and for Charles and Laud it was establishing a better church. ...read more.

His choice to go through with changes to religion was an error due to the opposition felt by so many of his people but he didn't not listen to the people so he became out of touch and determined to make his mark on the country. In this way he underestimated the power of the people, who in the end turned their back on him because of the way they were treated, and became such an opposing force that Charles eventually was made to back down. Charles' personality was a contributor because he was opinionated and didn't allow for debate on his choices, so he alienated his people and because he was weak, he allowed himself to be lead by advisors who also contributed to the crisis due to their advising wrong actions. His lack of political knowledge showed at times and this made him an easy target for rebellion. But although he was responsible to a great extent, Charles was not solely responsible as some blame must be put on Parliament for also making bad decisions and taking opposition to their own king instead of trying harder to help him in his time of crisis. Several individuals such as Laud who made the religious enforcements, his advisors Buckingham and Thomas Wentworth and even his own father James were contributors as Charles inherited the country in a certain state from James' rule, his advisors manipulated the easily-influenced king into making bad moves, and Laud was the one responsible for angering the people with his Catholic changes. The Scottish people must be acknowledged as an influential trigger as they brought the country's problems to the point of crisis. However these individuals were all only minor figures compared to Charles, whose continual stubbornness created a state of crisis in his country which, with careful and tactful ruling, could easily have been avoided. ...read more.