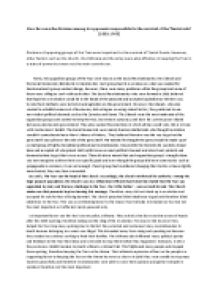 How far were the divisions among its opponents responsible for the survival of Tsarist rule?

﻿How far were the divisions among its opponents responsible for the survival of the Tsarist rule? (1881-1905) Divisions of opposing groups of the Tsar were important to the survival of Tsarist Russia. However, other factors such as the church, the Okhrana and the army were also effective in keeping the Tsar in a state of power but were not the main contributor. Firstly, the opposition groups of the Tsar were known as the Social Revolutionaries, the Liberals and the Social Democrats (Bolsheviks & Mensheviks). Each group had its own ideas on what was needed for Russia and each group wanted change, however, there were many problems within the groups and none of them were willing to work with each other. The Social Revolutionaries who were formed in 1901 believed that hope for a revolution would be in the hands of the peasants and accepted capitalism as the best way to rule their methods were terrorism and agitation on the government. ...read more.

If each group had considered changing their tactics or been slightly more lenient, they may have succeeded. Secondly, The Tsar was the head of the Church. Accordingly, the Church reinforced his authority. Among the huge peasant population, the Church was very influential. Official Church doctrine stated that the Tsar was appointed by God, and that any challenge to the Tsar - the 'Little Father' - was an insult to God. The Church made sure that peasants kept on hearing this message. Therefore many did not stand up in revolution and accepted his rule for fear of being damned. The church preached blind obedience to god and therefore blind obedience to the Tsar. This was a contributing factor to the reason Tsar Nicholas II remained as Tsar but not the most important as it affected mainly peasants only. An important factor was the Tsar?s secret police, Okhrana. They actively shut down Soviets across of Russia after the 1905 Uprising, therefore taking out the sting of the revolution. ...read more.

They stopped any relentless stirrings in the industrial workers. The officers bought their way in and were typically from the aristocracy, therefore forcing monarchist ideas on their fellow soldiers. The discipline within the army was also fierce, keeping the soldiers minds on patriotism to the Tsar and national spirit. They were seen as a united front, even throughout the mutinies especially in the Navy. Many Russian?s had family in the Army and therefore supported the Tsar because the Tsar was their sovereign. Because of this people did not feel the need to speak against the tsar for fear of offending the imperial Army. It was affective at keeping the Tsar on the throne but did not have as much of an impact as the division between the political opponents. To conclude, the divisions of opposing groups were the main factor for keeping the Tsar in reign as they did not work together for the greater good. Instead acted quite selfishly and allowed the Tsar to overthrow their 1905 revolution. The church, army and Okhrana were also contributing features but did not achieve as much for the Tsar as the divisions did. ...read more.