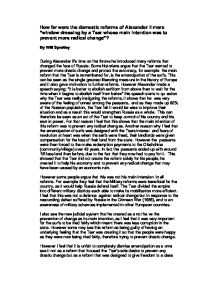 How far were the domestic reforms of Alexander II mere window dressing by a Tsar whose main intention was to prevent more radical change?

How far were the domestic reforms of Alexander II mere "window dressing by a Tsar whose main intention was to prevent more radical change"? By Will Spratley During Alexander II's time on the throne he introduced many reforms that changed the face of Russia. Some historians argue that the Tsar wanted to prevent more drastic change and protect the autocracy, for example the main reform that the Tsar is remembered for, is the emancipation of the surfs. This can be seen as the single greatest liberating measure in the history of Europe and it also gave motivation to further reforms. However Alexander made a speech saying; "It is better to abolish serfdom from above then to wait for the time when it begins to abolish itself from below" this speech starts to question ...read more.

However the peasants were then forced to the make redemption payments to the Obshchina (community/village) over 49 years. In fact the peasants ended up with around 1/5 less land than before, due to the fact that they now had to pay for it. This showed that the Tsar did not create the reform solely for his people; he created it to help his economy and to prevent any radical change that may have been caused by an economic ruin. However some people argue that this was not his main intension in all reforms. For example they feel that the Military reforms were beneficial for the country, as it would help Russia defend itself. The Tsar divided the empire into different military districts each able to make its mobilisation more efficient. ...read more.

However I feel that it is unfair to completely dismiss emancipation as some see it not as a reform that focused the Tsar's sole desire to prevent any drastic change but as a reform that was designed to give freedom to a class that had before been denied any form of independence, to me this shows that not all reforms were designed by the Tsar to prevent drastic change. In conclusion I feel that Alexander II's main intension in all of the reforms was to prevent more drastic change in Russia, as I feel that each of the reforms that he created have and underlying feeling that each was designed so that the autocracy benefited from it in some way, or so that there wouldn't be anything that could lead to any radical change like an revolution of some kind. ...read more.