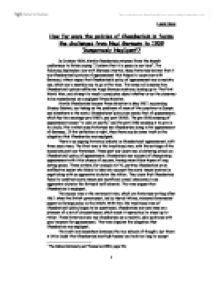 How far were the policies of Chamberlain in facing the challenges from Nazi Germany to 1939 'Dangerously Negligent'?

How far were the policies of Chamberlain in facing the challenges from Nazi Germany to 1939 'Dangerously Negligent'? In October 1938, Neville Chamberlain returned from the Munich conference to Britain saying "I believe that it is peace in our time". The following September, war with Germany started. Many historians believe that it was Chamberlain's policies of appeasement that helped to cause war with Germany; others argue that Chamberlain's policy of appeasement was a realistic one, which was a sensible way to go at the time. This essay will examine how Chamberlain's policies affected Anglo German relations, leading up to The First World War, and attempt to reach a conclusion about whether or not he deserves to be remembered as a negligent Prime Minister. Neville Chamberlain became Prime Minister in May 1937, succeeding Stanley Baldwin, and taking on the problems of some of the countries in Europe and elsewhere in the world. Chamberlains' policy was mainly that of appeasement, which has two meanings-pre 1930's, and post 1930's. The pre 1930 meaning of appeasement means 'To calm or pacify',1 and the post 1930 meaning is to give in to a bully; this is what many historians see Chamberlain doing in his appeasement of Germany. If this definition is right, then there may be some truth in the allegation that Chamberlain was negligent. There is an ongoing historical debate on Chamberlain's appeasement, with three main views. The first view is the traditional view, with the writings of the immediate post war historians. These post war years saw a blistering attack on Chamberlain's policy of appeasement. Chamberlain was accused of championing appeasement with little chance of success, having raised false hopes of long lasting peace. These writers, for example CATO, portray Chamberlain as an ineffective leader who failed to take into account the moral issues involved in negotiating with an aggressive dictator like Hitler. They claim that Chamberlain failed to confront moral issues and sacrificed a small democracy to an aggressive dictator for Britain's self interest. ...read more.

John Charmley also agrees with Chamberlain's policy of appeasement he tells us that 'Chamberlain's foreign policy was an attempt to see if co-existence was possible; that it turned out not to be is no reason for condemning out of hand the only policy which promised any hope of avoiding war'6. According to John Charmley, later in the same article, 'Men of honour will cavil at trying to appease a dictator, while the more cynical will assert that as Hitler was bound to attack us, we were wrong to try to postpone the evil day...and turkeys are seldom well-advised in pressing for an early Christmas.' In other words, if Chamberlain had not appeased Hitler in 1938 and gone to war, things could have turned out quite differently; this may not necessarily have been for the better. Indeed, evidence shows that between 1938 and 1939, expenditure on arms was greatly increased in Britain and France7. The total military expenditure in Britain increased from �400.3 million in 1938 to �700.5 million in 1939. This shows that Britain did take advantage of the extra year, and built up their military before the war. It has also been said that the British rearmament was rearmament in depth. That means that they concentrated in setting up factories which could produce war materials while the Germans concentrated on producing as many weapons as possible in as short a time as possible without the thought of replacing losses during wartime. Here, as in 1914, Germany was gambling on a quick victory; the longer a war lasted, the more likely Germany was to lose. Some historians however, believe that Chamberlain's methods of dealing with Hitler were 'dangerously negligent'. According to M. Gilbert and R. Gott, 'Germany, not Britain, gained militarily during the extra year. German forces were strengthened by Czech munitions, western forces weakened by the loss of the Czech Army and Air Force...'8. ...read more.

One main factor that portrays Chamberlain as negligent is how he dealt with Hitler at the Munich conference. Many historians argue that he should have stopped Hitler earlier, and even though Britain gained an extra year to rearm, Hitler also gained this extra year to produce more armaments. I believe that Chamberlain was most negligent by not entering into an Anglo-Soviet alliance. This is where he has come under close criticism; this may have averted Hitler from entering Poland, as he would have had an enemy on the other side. However, we can judge this with the benefit of hindsight. Chamberlain did not have this advantage, and the things that he did; he believed were for the benefit of his country. What he did was with the best intentions, and just because they didn't work, it doesn't mean that all his policies were 'dangerously negligent'. Chamberlain can be criticised for being too lenient, and maybe he did allow Hitler to go too far, but through gaining extra time, Chamberlain also gained public support. By doing this, when Chamberlain entered into war with Germany in 1939, he did so with full public support. So, some of Chamberlain's policies may have been unwise, and even bordering on foolish, but I believe that overall, his policies to Nazi Germany were used well, and were not really negligent. 1 The Collins Dictionary and Thesaurus (1990, page 43). 2 Andrew Boxer, 'Appeasement' from the 'Questions In History' series (1998; page23) 3 Fuchser, 'Neville Chamberlain and Appeasement: A Study in the Politics of Appeasement' (New York, Norton, 1982) 4 John Wheeler Bennet, 'Munich: Prologue to Tragedy' (1948) 5 David Dilks, 'The Conservatives' ed. Lord Butler (1977) 6 John Charmley, in 'The Independent' (1989) 7 See Appendix (I and II) 8 M. Gilbert and R. Gott, 'The Appeasers' (1963) 9 See Appendix (I and II) 10 A.P. Adamthwaite, 'The making of the Second World War' (1977) 11 Andrew Boxer, 'Appeasement', from the 'Questions in History' series (1998; page 41) 12 See Appendix (III) 13 Source: D. Watt, 'How War Came' (1989) Laura Howe 7 ...read more.