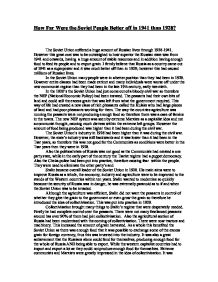 How Far Were the Soviet People Better off in 1941 than 1928? The Soviet Union suffered a huge amount of Russian lives through 1928-1941. However this great cost was to be outweighed to how superior the Russian state was from 1941 and onwards, having a huge amount of stable resources and in addition having enough food to feed its people and to export grain. I firmly believe that Russia as a country came out of 1941 as a superpower and it was much better off than in 1928; however this had caused millions of Russian lives. In the Soviet Union many people were in a better position than they had been in 1928. However entire classes had been made extinct and many individuals were worse off under the new communist regime than they had been in the late 19th century, early twentieth. In the 1920's the Soviet Union had just come out of a bloody civil war so therefore the NEP (National Economic Policy) had been instated. The peasants had their own bits of land and could sell the excess grain that was left from what the government required. This way of life had created a new class of rich pheasants called the Kulaks who had large pieces of land and had poor pheasants working for them. ...read more.

For instance one city, 'Magnitogorsk' was an industrial city for Iron Ore extraction and the making of Iron. Another 'Tankigorsk' was a city mainly built for producing tanks, they were so efficient that at one point they were making a tank per minute! A great benefactor for Russia was that throughout the period of the severe depression in the Western countries, where there was mass unemployment and food shortages. Russia was flourishing. There was no unemployment! The USSR was completely self efficient with everyone having a part to do for there country. This again was communism in action, where the people were working for a greater Russia and everyone living the same standards of life. While the workers worked long shifts they still felt they were doing something for their country. Picking the old backward Russia and making it a super power. Also women were involved; in many countries at this time women were known to just stay at home and clean the house and look after the children. However the Russians used the women as they were using their men. Many women were having children and having a job at the same time. They were also given benefits for doing this, free day care etc. Also the workers were being given new housing in the new cities. More schools and hospitals were being built for them. ...read more.

Clubs, sports facilities etc. were provided by the state. The state also controlled the cinema, radio etc. but an emphasis was placed on educating yourself via the media as it was then. So therefore I believe that as a whole Russia was better off in 1941 than it had been in 1928 as the country did become a major industrial nation by 1939 and her progress was unmatched in the era of the Depression in America and Western Europe where millions were unemployed. Those workers who did not offend the state were better off than under the reign of the tsar. Russia's military forces were benefiting from her industrial growth. However millions had died in famine after the failed experiment of collectivisation. Russia's agriculture was at the same level in 1939 as in 1928 with a 40 million increased population, (the amount of food being produced in 1928 was not a great deal, so therefore with a 40 million population increase there would be future problems). Many groups/classes had been persecuted or wiped out completely because they did not 'fit in' with the communist way of life. Also 25 million Russian lives had been sacrificed in the Second World War but Russia as a state had survived the invasion, while her people were left for dead. So thus, a minority of Russian civilians benefited significantly during the 13 years while most of the Russian lives stayed the same if not worse. ...read more.