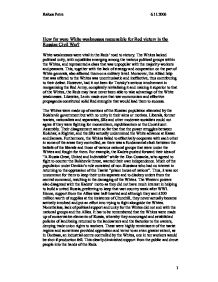 How far were White weaknesses responsible for Red success in Russian Civil War?

How far were White weaknesses responsible for Red victory in the Russian Civil War? White weaknesses were vital in the Reds' road to victory. The Whites lacked political unity, with squabbles emerging among the various political groups within the Whites, and represented a class that was unpopular with the majority-workers and peasants. This, together with the lack of strategy and cooperation on the part of White generals, also affected them on a military level. Moreover, the Allied help that was offered to the Whites was unenthusiastic and ineffective, thus contributing to their defeat. However, had it not been for Trotsky's serious involvement in reorganising the Red Army, completely revitalising it and making it superior to that of the Whites, the Reds may have never been able to take advantage of the White weaknesses. Likewise, Lenin made sure that war communism and effective propaganda constituted solid Red strengths that would lead them to success. The Whites were made up of sections of the Russian population alienated by the Bolshevik government but with no unity in their aims or motives. Liberals, former tsarists, nationalists and separatists, SRs and other moderate socialists could not agree if they were fighting for monarchism, republicanism or the Constituent Assembly. Their disagreement went so far that that the power struggles between Kolchak, a Rightist, and the SRs actually undermined the White advance at Kazan and Samara. Furthermore, the Whites failed to effectively cooperate with each other in some of the areas they controlled, as there was a fundamental clash between the beliefs of the liberals and those of various national groups that were under the Whites and fought for them. ...read more.

The reformation of the army was now based on hierarchy again, which meant that Trotsky put aside communist ideals. However, it proved to be highly effective as he was unwilling to have an army based on "a game of chance, by allowing each unit to decide for itself whether it would agree to advance or to remain on the defensive" like the Whites did. Moreover, each leading figure knew his job, as commanders were in charge of military leadership and commissars concentrated on political and educational work of the army making sure that the army always had the Red objective of the continuity of the revolution in mind, as opposed to the Whites, where the generals had a universal role and thus it was easy for them to lose sight of various aspects. Trotsky even introduced cavalry to the Red Army, as he saw the Whites' cavalry as a possible strength and "after only a few months, our cavalry could stand comparison with the enemy's, and subsequently it seized the initiative once and for all." Trotsky acted as the person in overall charge, holding things together and making the organisation work effectively. He was actively involved in the process through which the army was going, however leaving key military decisions to experts as he admitted he did not have experience in the field, and he seemed to inspire men in a way that other leaders, especially the second class White generals, could not. Therefore, he was the one who motivated the men to fight and save Petrograd from Yudenich's army when Lenin thought that they would have to give it up. Nonetheless, although Lenin did not play an important role in influencing the Red Army, he consolidated the Bolshevik state, making sure that the ...read more.

second rate generals who failed to determine their men and to create unity amongst them, would have propagated even an incapable enemy army to victory. However, in my opinion, Trotsky's central role in the reformation of the Red Army cannot be underestimated. He established discipline and hierarchical values that, as opposed to the Whites who had various squabbling generals, gave the army an organised structure. Moreover, he clearly understood the importance of propaganda and took advantage of it, thus consolidating the communist purpose behind the Bolsheviks' actions and determining the army and the rest of the population under the Reds that they were fighting and working for a firm aim. Therefore, the reforms were a crucial aspect of Red victory; War Communism automated Red Russia towards the war effort and its short term success proved to be essential in making sure that the army was supplied, whilst Whites had to rely on foreign support. Hence, without their own strengths, the Reds may have never been able to rise themselves to being superior to the Whites and thus their own abilities played a key role in their success to a great extent. Nonetheless, despite the short term success of War Communism, it proved to be disastrous for the economy and the people of Russia so much that Lenin decided to replace it with a New Economic Policy after the Reds won the Civil War; it was not only War Communism that affected Russia but the burden of the Civil War itself. During the War, central authority disappeared and local areas were left to fend for themselves, while workers' wages were 2% of their 1913 ones, meaning that standards of living during the Civil War had seriously declined. ?? ?? ?? ?? Raluca Petre 6.11.2006 1 ...read more.