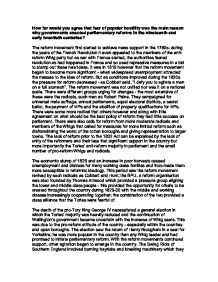 How far would you agree that fear of popular hostility was the main reason why governments enacted parliamentary reforms in the nineteenth and early twentieth centuries?

How far would you agree that fear of popular hostility was the main reason why governments enacted parliamentary reforms in the nineteenth and early twentieth centuries? The reform movement first started to achieve mass support in the 1760s; during the years of the French Revolution it even appealed to the members of the anti-reform Whig party but as war with France started, the authorities feared revolution as had happened in France and so used repressive measures in a bid to stamp out these new ideas. It was in 1815 however that the reform movement began to become more significant - when widespread unemployment attracted the masses to the idea of reform. But as conditions improved during the 1820s the pressure for reform decreased - as Cobbett said, "I defy you to agitate a man on a full stomach". The reform movement was not unified nor was it on a national scale. There were different groups urging for changes - the most extensive of these were the radicals, such men as Robert Paine. They campaigned for universal male suffrage, annual parliaments, equal electoral districts, a secret ballot, the payment of MPs and the abolition of property qualifications for MPs. There were some more radical that others however and along with little agreement on what should be the best policy of reform they had little success on parliament. ...read more.

As had happened prior to the 1832 Act, 1866 saw economic problems which increased social discontent and fuelled the calls for reform - this is evident in the huge surge of membership to the Reform Union and Reform League. In 1866 both organisations - one middle class, the other working - started working together, creating the same threat that the Tories had feared back in 1830. It was the Liberal party that introduced the first Bill to parliament, with them seeing the opportunity in enfranchising selective members of working class who were already in favour of the party. The radicals backed the Bill but believed that the measure was too limited; many right-wing Liberals however thought the opposite - that the Bill would enfranchise too many of the working class. The Conservatives saw the opportunity of the split ideology and the Liberal party and worked with the right-wingers in defeating the Bill in June of 1866; the Liberal government resigned, giving way to a minority Conservative administration. Despite his own parties' opposition to reform, Disraeli introduced his own reform Bill based purely on self-interests in gaining the support of the proposed boroughs to be enfranchised. Moreover, Disraeli also claimed that he intended to 'destroy the present agitation' in the country. As well as party political interests, agitation was still ongoing with radicals and organisations pushing for reform. ...read more.

Parliament found it increasingly difficult to ignore calls for reform from organisations such as the National Union of Women's Suffrage and the Women's Social and Political Union, both of which held demonstrations and were increasing in popularity. They began more militant activities including vandalism and attacks on MPs which only helped to alienate potential supporters, it was in fact the more moderate groups that found the greater success. Once again it came down to party politics with the Liberal party in 1905 believing that enfranchising women on the same basis as men would create a majority middle-class, who were more than likely to vote Conservative. The reform movement virtually disappeared during the outbreak of the war, which reinforces the claim that the Fourth Reform Act - passed in 1918 - was a result of the parties, and not extra-parliamentary pressure. The Liberals and Labour both supported universal male suffrage by now, with the Conservatives apposing the idea at first but hoping such enfranchised men would vote Conservative. Women were also partly included in the act - not because of suffragette pressure, but because before the war a majority of MPs favoured extending the vote to them as long as it was in their parties interests. It can therefore be seen that virtually no agitation or pressure was put on parliament during the time leading up to the 1918 Act, it was simply due to the self-interests of the parties - with each benefiting from a particular aspect of the Bill. ?? ?? ?? ?? ...read more.