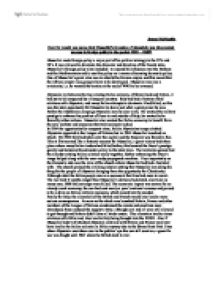 How far would you agree that Mussolini&amp;#146;s invasion of Abyssinia was his greatest success in foreign policy in the period 1922 &amp;#150; 1943?

James McMeekin How far would you agree that Mussolini's invasion of Abyssinia was his greatest success in foreign policy in the period 1922 - 1943? Mussolini made foreign policy a major part of his political strategy in the 20's and 30's. It was allowed to dominate the character and direction of the Fascist state. Mussolini's foreign policy aims included: to expand his influence over the Balkans and the Mediterranean and to use this policy as a means of securing domestic policy. One of Mussolini's great aims was to rebuild the Roman empire and this meant that the African empire was going to have to be developed. Mussolini was also a revisionist, i.e. he wanted the treaties at the end of WWI to be reversed. Abyssinia lay between the two existing Italian colonies, of Somaliland and Eritrea, it had yet to be conquered by a European country. Italy had had a history of bad relations with Abyssinia, and many Italian attempts to dominate it had failed, so this was the ideal opportunity for Mussolini to show just what a great power he was. ...read more.

The economic impact was severe for an already weak economy; the war had cost nearly a year's national revenue and proved to be a drain on Italian military resources, which would later be needed. Fatally for Italy, the alienation of the British and French would later lead to more serious consequences. As soon as the attack was launched Britain, France and other members of the League of Nations condemned the events and sanctions were introduced, these reduced the supply to Italy, although coal and oil were still allowed to get through and Britain didn't close all trade routes. This alienation lead to closer relations with Hitler and, later lead to Italy being brought into the WWII. Also if Mussolini hadn't of attacked Abyssinia relations with Britain and France may later have lead to the Italian colonies in Africa anyway due to the Stresa Front Pact. Even when Abyssinia was taken over in the publics' eye the war still went on, a guerrilla war was fought until 1941 when the British took it over. ...read more.

of how strong they actually where and more importantly Mussolini himself began to believe these claims of how great the army where. Mussolini then would enter Italy into wars that Italy physically couldn't perform in. I agree with Martin Clark's opinion in that Abyssinia was costly on the economy and that the conflict gave Mussolini and many Italians an inflated sense of their own military capability. As a result of Abyssinia there was a break down in relations with Great Britain and France, later deciding the outcome of the Second World War for Italy. Mussolini's greatest foreign policy success was the tactics used to gain control over Yugoslavia, careful planning of how other Major European powers would react was taken into account and Mussolini avoided any direct conflict with them, keeping all options open for the future. His greatest decision although was initial the decision to remain out of the Second World War in 1939; this was later ruined by the decision to enter Italy into the war in 1940. ...read more.