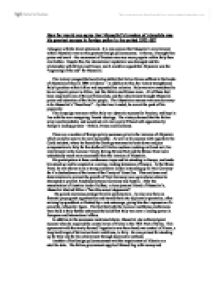 How far would you agree that Mussolini's invasion of Abyssinia was his greatest success in foreign policy in the period 1922-38?

How far would you agree that Mussolini's invasion of Abyssinia was his greatest success in foreign policy in the period 1922-38? I disagree with the above statement. It is my opinion that Mussolini's involvement within Abyssinia was not his greatest foreign policy success. At home, it brought him praise and merit - the movement of Fascism was now more popular within Italy than ever before. Despite this, his international reputation was damaged and his relationship with Britain and France, and it could be argued that Abyssinia was the "beginning of the end" for Mussolini. The victory avenged the humiliating defeat that Italian forces suffered at the hands of Abyssinian tribes in 1896 at Adowa - in addition to this, the victory strengthened Italy's position within Africa and expanded her colonies. Italy was now considered to be an imperial power in Africa, just like Britain and France were. All of these had been long-held aims of Italian Nationalists, and the achievement brought Mussolini praise and adoration of the Italian people. ...read more.

The fact that both the Locarno and Stresa conferences were held in Italy further enhanced the belief that Italy was now a leading power in European and International affairs. In addition to the successes mentioned above, Mussolini also achieved great success when he acquired the coastal town of Fiume in the 1924 Pact of Rome. This agreement with the newly formed Yugoslavia saw them hand over control of Fiume, a long-held target of Italian territorial ambitions, to Italy. He was praised for standing up for Italy and for his achievement through diplomatic methods. Another of his foreign policy successes was the acquirement of Albania as a satellite state. The Italian government supplied Ahmed Zog with money and employed Italian officers as advisors to the Albanian army. Italy's involvement with Albania posed a military threat to Yugoslavia, while at the same time strengthening Italy's position in the Balkans. Mussolini had been angry that France's involvement in the Balkans was undermining Italy's strength in the region. ...read more.

The Italian attack had united Ethiopia's warring tribes and their guerrilla attacks were difficult for the inexperienced Italian forces to deal with. Internationally, Mussolini's reputation plummeted and the reaction had not been the one that he had expected. He was condemned for his attack on Ethiopia, who was at the time a member of the League of Nations. This led to sanctions being imposed on Italy and meant that no country was allowed to carry out arms sales with Italy and League of Nations members banned the import of Italian goods. This was a further blow to the already ailing Italian economy. In conclusion, I do not agree with the comment "Mussolini's invasion of Abyssinia was his greatest foreign policy success in the period 1922-38". The obvious successes cannot be ignored, but these successes were clearly exaggerated by Mussolini's excellent application of propaganda. With regards to Abyssinia, the effect it has on Italy's economy and the damage it does to Mussolini's reputation outweigh the successes. ...read more.