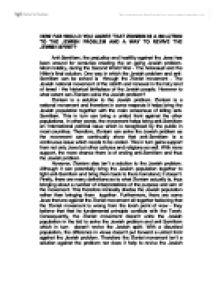 HOW FAR WOULD YOU AGREE THAT ZIONISM IS A SOLUTION TO THE JEWISH PROBLEM AND A WAY TO REVIVE THE JEWISH SPIRIT?

HOW FAR WOULD YOU AGREE THAT ZIONISM IS A SOLUTION TO THE JEWISH PROBLEM AND A WAY TO REVIVE THE JEWISH SPIRIT? Anti-Semitism, the prejudice and hostility against the Jews has been around for centuries creating the on going Jewish problem. Most notably, during the Second World War - The holocaust and the Hitler's final solution. One way in which the Jewish problem and anti-Semitism can be solved is through the Zionist movement - The Jewish national movement of the rebirth and renewal in the holy land of Israel - the historical birthplace of the Jewish people. However to what extent can Zionism solve the Jewish problem? ...read more.