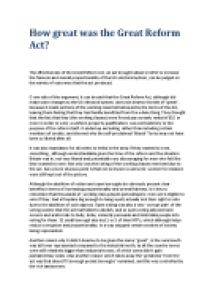 How great was the Great Reform Act?

ï»¿How great was the Great Reform Act? The effectiveness of the Great Reform Act, an act brought about in 1832 to increase the fairness and overall proportionality of the UK electoral system, can be judged on the variety of outcomes that the act produced. O one side of the argument, it can be said that the Great Reform Act, although did make some changes to the UK electoral system, does not deserve its title of “great”, because it made sections of the working class feel betrayed by the terms of the Act, leaving them feeling that they had hardly benefited from the whole thing. They thought that the fact that they (the working classes) were forced pay a yearly rental of £10 or more in order to vote- a uniform property qualification- was contradictory to the purpose of the reform itself- it ended up excluding, rather than including certain members of society, and showed why the self-proclaimed ‘liberal’ Tories may not have been so liberal after all. It was also mandatory for all voters to enlist in the army if they wanted to vote, something , although understandable given the time of the reform and the situation Britain was in, not very liberal and potentially very discouraging for men who felt like they wanted to vote. ...read more.

This reduction of the unfair boroughs meant that significant amounts of Tory voters were lost, therefore benefitting the Whigs all the more and increasing Whig popularity, this supplied Whig?s with the confidence to make more reforms, and did indeed help them properly secure power and helped them to implement vital reform to Britain in the near future. The abolition of the rotten and pocket boroughs also improved the fairness and reduced the corruption and omnipotence of wealthy aristocrats in the areas, as well as adding a degree of proportionality to the electoral system. The Great Reform Act can also in a way be seen as being ?great?, due to the fact that it actually helped reduce the chances of revolution at the time. Prior to the reform the middle-classes had rebelled and had threatened to not pay taxes in order to force the government into the passing of the bill. After the bill was made an act, the countryside then settled down and a revolution did not happen, therefore the Reform Act had shown great content for the population which in turn made Britain become more ?at ease?- the threat of an uprising had been greatly reduced. ...read more.

and the government implementing a requirement to be paying a minimum yearly rental of £10 and forcing people to conscript if they wanted to vote, the advantages were clear, and somewhat necessary. The Reform Act did not completely revamp the old system- however the changes that were made were certainly significant. The reduction of rotten/pocket boroughs and the 'redistribution' of proportionality helped increase the value of the vote, and at the same time satisfied members of society who were threatening revolt- it could be said that the reform prevented revolution, and the mandatory conscription did not have such an adverse effect after all- it meant that Britain now had a strong enough army to deal with any domestic/international threats. The Reform was also beneficial to the Whigs- it allowed to them to consolidate their support, leading to the introduction of new policies following shortly after the reform. Reform was much needed, and although the Great Reform Act of 1832 did not go all the way in completely changing the nature of the electoral system, it would be fair to say it allowed Britain to take the first big steps to breaking away from the shackles of the much out-dated, unjust old system, in which Britain had been encapsulated for so long. Thomas Smith ...read more.