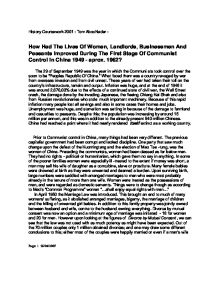 How Had The Lives Of Women, Landlords, Businessmen And Peasants Improved During The First Stage Of Communist Control In China 1949 - aprox. 1962?

History Coursework 2001 : Tom AbouNader : How Had The Lives Of Women, Landlords, Businessmen And Peasants Improved During The First Stage Of Communist Control In China 1949 - aprox. 1962? The 29 of September 1949 was the year in which the Communists took control over the soon to be "Peoples Republic Of China." What faced them was a country ravaged by war from overseas invasion and from civil unrest. These years of war had taken their toll on the country's infrastructure, terrain and output. Inflation was huge, and at the end of 1948 it was around 2,870,00% due to the effects of a continued state of civil war, the Wall Street crash, the damage done by the invading Japanese, the fleeing Chiang Kai Shek and also from Russian revolutionaries who stole much important machinery. Because of this rapid inflation many people lost all savings and also in some cases their homes and jobs. Unemployment was huge, and starvation was setting in because of the damage to farmland and casualties to peasants. Despite this; the population was increasing by around 15 million per annum, and this was in addition to the already present 540 million Chinese. China had reached a point where it had nearly rendered itself extinct as a working country. ...read more.

This was something like a trial by accusation for the landlords and in some cases also for KMT officials. In these meetings the indicted were usually humiliated, made to confess to crimes and/or forced to take a lowly place in the community. They were stripped of their status, privileges, political rights and of all their previously owned land(which was later collectively split and divided among the peasants.) In some cases the accused was sentenced to death and shot. Meetings would sometimes get out of hand and become violent towards the particular person on "Trial". This sometimes led to severe beatings and frequently death. After only one year of communist control; deaths of around 1million landlords, KMT officials and members were estimated. Businessmen had also been badly affected by the ongoing civil war and the eventual communist take-over. Much of the country's industry had been destroyed through war, invasion and Russian "liberation". Many remaining businesses were simply taken over by the government; owners were not allowed to draw any profit, except in sparse cases where profit was extremely limited. Mao released his first "Five Year Plan" where he decreed businesses were to optimise and increase output on all industrial fronts; putting increasing pressure on businessmen's shoulders to perform to the maximum. ...read more.

Mao had failed to find the balance between the rate of agricultural and industrial advancement, the consequence of this was the death of 10-25 million people, most of which were the peasants. The peasants were the hands on the end of Mao's arms doing his binding at whatever cost, and at the end of it all, what had they gained? They themselves were still peasants, were still tied to manual labour and still had not really gained any social height. But their devotion to Mao blinded them from this in many cases, and they continued to do his biding. All in all the peasants, women, landlords and businessmen all lost and gained from the communists, although admittedly in many cases what they gained was in fact exactly what they lost. What Mao brought was in some ways a strong dictatorship hidden behind a veil of socialism. Mao utilised the peasants in ways they could not discern or perceive and manipulated their actions to his wishes. Consequently he brain-washed a nation into devout Mao obsessives and used them as tools and fertiliser in his metaphorically blooming garden. Nonetheless he had acclaimed popularity and was well on his way to deification. In short Mao cheated all of these groups out of something, but the way in which he did this was just subtle enough not to cause uproar in his newly united country. ...read more.