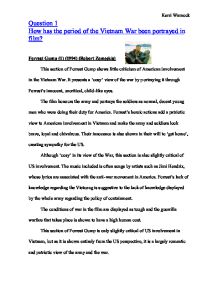 How has the period of the Vietnam War been portrayed in film? Forrest Gump (1) (1994) (Robert Zemeckis)

Question 1 How has the period of the Vietnam War been portrayed in film? Forrest Gump (1) (1994) (Robert Zemeckis) This section of Forrest Gump shows little criticism of American involvement in the Vietnam War. It presents a 'cosy' view of the war by portraying it through Forrest's innocent, uncritical, child-like eyes. The film honours the army and portrays the soldiers as normal, decent young men who were doing their duty for America. Forrest's heroic actions add a patriotic view to American involvement in Vietnam and make the army and soldiers look brave, loyal and chivalrous. Their innocence is also shown in their will to 'get home', creating sympathy for the US. Although 'cosy' in its view of the War, this section is also slightly critical of US involvement. ...read more.

The music used in the film is Wagner's 'Ride of the Valkyries'. It is an exciting and invigorating piece, which is carefully juxtapositioned with the singing of Vietnamese children to 'jolt' and heighten the brutality of the army. It is also known to be Hitler's favourite piece, which suggests war and brutality. The film portrays a 'boys own excitement' view of the war through the 'gun ho' attitudes of the soldiers. One captain in particular is portrayed as psychotic and brutal in the extreme. His comments such as 'I love the smell of Napalm in the morning' and 'Do these people never give up?' are critical of the servicemen and portray them as savages. The US conduct of war is shown in the film as superior. The use of Napalm and massive brutality are shown and the Vietcong are presented as civilians, or mixed within. ...read more.

It is shown through the eyes of 'a child' and therefore, demonstrates simply what adults fail to realise. It is not openly critical or approving of the Vietnam War, but simply reminds us that 'Love is important'. Platoon (1986) (Oliver Stone) The devastation, red, dusty crater-like scene in this film suggests a 'hell on earth'. The images of bodies being scraped are reminiscent of Nazi concentration camps and imply major devastation and murder. This is critical of the US regime in Vietnam. This scene is very poignant; an atmosphere created by melancholic music and pensive reflections of a soldier. The soldiers in the scene are portrayed as willing to go home; they are not openly criticised, the criticism that the film shows lies with the American government. The film is dedicated 'To the men who fought and died in the Vietnam War'. This very anti-war statement is dedicated to all of the soldiers, not just American. Kerri Warnock ...read more.